Pizza Hut has found a way to get more cheese into American diets — a pizza crust made of little cheese-stuffed bread bowls. The chain on Wednesday will introduce a new pizza that comes surrounded by 16 semi-circles of cheese that can be pulled off and eaten separately. 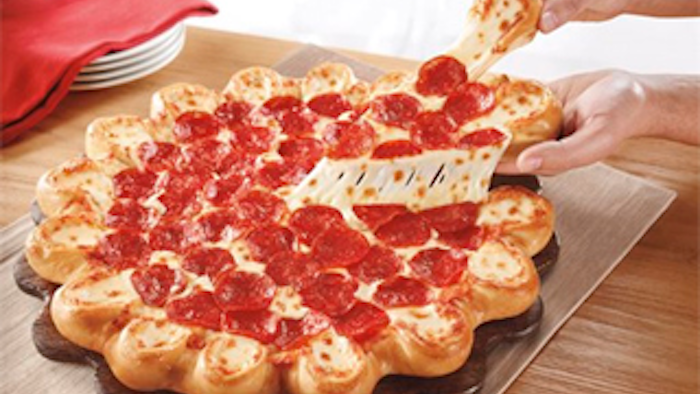 NEW YORK (AP) — Pizza Hut has found a way to get more cheese into American diets — a pizza crust made of little cheese-stuffed bread bowls.

The chain on Wednesday will introduce a new pizza that comes surrounded by 16 semi-circles of cheese that can be pulled off and eaten separately. The "Crazy Cheesy Crust," which will be available for several weeks, isn't the first time Pizza Hut has incorporated cheese into its crusts.

In 1995, the chain introduced its Stuffed Crust Pizza as a limited-time offer but the pies were such a hit that they soon became a permanent part of the menu.

Even as fast-food chains increasingly look to cater to health-conscious diners, Pizza Hut's latest invention shows Americans still have an appetite for indulgent new creations. Burger King, for example, recently rolled out its first turkey burger as part of a limited-time spring menu. But the menu also included a burger stuffed with bacon and cheddar cheese, as well as tater tots stuffed with bacon and sweet onions.

Pizza Hut has also offered variations of the cheese-stuffed crust with pepperoni and other toppings hidden inside. Fast-food fanatics may also notice that the latest pizza has a similar shape to the chain's "Crown Crust" pie that was introduced in the Middle East a year ago. That pie, which comes surrounded by mini-cheeseburgers, isn't available in the U.S. but images of it have circulated widely online. In Japan and Thailand, Pizza Hut has also offered pizzas with hot dog-stuffed crusts.

Doug Terfehr, a spokesman for Pizza Hut, noted that the cheeseburger and hot dog crusts worked overseas because people often group together those foods and pizza as being American, so combining them makes sense. He said the Crazy Cheesy Crust was developed specifically for the U.S. market. By not making it an over-the-top indulgence, Terfehr said it would be more likely that people would buy the pies repeatedly rather than just trying them once as a novelty.

Pizza Hut's executive chef Wiley Bates said it took about a year to perfect the pie and that the shape had to be simplified so it would be easy for restaurant employees to make. For example Bates said earlier versions of the pie had four little cups of cheese per slice, rather than two.

With one topping, the Crazy Cheesy Crust is $3 more per pie than Pizza Hut's regular $10 pie.

The new pies come just ahead of the Final Four games this weekend, when pizza sales typically spike. In February, Pizza Hut also introduced its "pizza sliders" as a way to lift sales after Super Bowl weekend, when people might have pizza fatigue.

Pizza Hut has 6,400 locations nationwide and is a unit of Yum Brands Inc., which also owns KFC and Taco Bell. Last year, sales at Pizza Hut restaurants open at least a year rose 3 percent after flat growth in the previous year.

The metric is a key gauge of health because it strips out the impact of newly opened and closed locations.