The Obama administration has finalized regulations that will force automakers to nearly double the average gas mileage of all new cars and trucks they sell by 2025. The rules mean that all new vehicles would have to get an average of 54.5 miles per gallon in 13 years, up from 28.6 mpg at the end of last year. The requirements will be phased in gradually between now and then, and automakers could be fined if they don't comply. 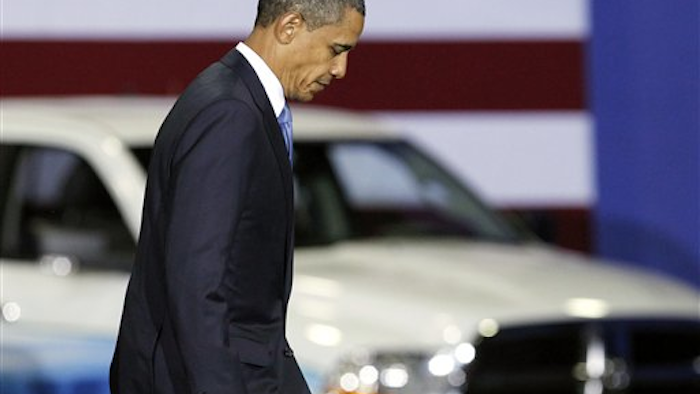 In this Friday, July 29, 2011, photo, President Barack Obama walks down a ramp after delivering a speech at a gathering where he announced new fuel efficiency standards for cars and light trucks at the Washington Convention Center in Washington. (AP Photo/Manuel Balce Ceneta)

WASHINGTON (AP) — The Obama administration has finalized regulations that will force automakers to nearly double the average gas mileage of all new cars and trucks they sell by 2025.

The rules mean that all new vehicles would have to get an average of 54.5 miles per gallon in 13 years, up from 28.6 mpg at the end of last year. The requirements will be phased in gradually between now and then, and automakers could be fined if they don't comply.

The regulations, announced Tuesday, will change the cars and trucks sold in U.S. showrooms, with the goal of slashing greenhouse gas emissions and fuel consumption. Automakers will need to improve gasoline-powered engines, and sell more alternative fuel vehicles. Critics say the rules will make cars unaffordable by adding thousands of dollars to the sticker price.

The "Corporate Average Fuel Economy," or CAFE standards, will vary by automaker depending on the mix of models they sell. The requirements will be lower for companies such as General Motors, Ford and Chrysler, which offer more pickup trucks. The standards can be lowered by the government if people suddenly start buying less-efficient vehicles in the future, although few expect that to happen.

The administration says the latest changes will save families up to $7,400 on fuel over the life of a vehicle. The standards also are the biggest step the U.S. government has ever taken toward cutting greenhouse gas emissions, Environmental Protection Agency Administrator Lisa Jackson said. Tailpipe emissions from cars and light trucks will be halved by 2025.

But Republican presidential nominee Mitt Romney has opposed the standards, and his campaign on Tuesday said any savings at the pump would be wiped out by the rising cost of cars and trucks.

Already, automakers have committed to an average of 35.5 mpg by model year 2016 under a deal reached with the Obama administration three years ago.

In the arcane world of government regulations, the rules don't mean that each new car or truck will get 54.5 mpg. The average vehicle will get closer to 40 mpg in real-world driving. Automakers will be able to sell pickup trucks and less-efficient vehicles as long as that's offset somewhat by smaller vehicles that already can get upward of 40 mpg.

Automakers can reduce the mileage they're required to get with credits for selling natural gas and electric vehicles, changing air conditioning fluid to one that pollutes less, and adding stop-start circuits that temporarily shut off the engine at stop lights.

At showrooms, dealers are likely to offer more efficient gas-electric hybrids, natural gas vehicles and electric cars. There also will be smaller motors, lighter bodies and more devices to save fuel.

Automakers have already been adding technology to boost the efficiency of gasoline-powered engines, mainly because people want to spend less at the pump. Fuel economy is the top factor people consider when buying a car in the U.S., according to the research firm J.D. Power and Associates. The national average for gasoline hit $3.76 Tuesday, the highest price ever for this time of year.

Fuel efficiency has been rising for the past five years because government regulations and high gas prices have encouraged smaller vehicles and engines. The average new car now goes almost four miles farther on a gallon of gas than it did in October of 2007, according to the University of Michigan Transportation Research Institute.

Market demand for more efficient vehicles already has pushed the auto industry to boost mileage with an array of technology, said Roland Hwang, transportation director for the Natural Resources Defense Council. "We're pleasantly surprised to see how fast the industry is moving," he said.

The administration estimates that the new rules, combined with those that began in 2011, will raise the cost of a new car about $2,800 by 2025. The estimates are based on 2010 dollars. But the government says the net savings from the requirements still will be $3,500 to $5,000 because people will spend less on gas.

The administration also predicts that the new regulations will cost the auto industry about $135 billion from 2017 to 2025.

The new rules were adopted after an agreement between the administration and 13 automakers last year. That's a change from the past, when automakers fought the regulations, saying they cost too much.

Industry leaders repeatedly told the Obama administration that they wanted one nationwide fuel standard, fearing separate mileage standards from California and other states.

"They wanted certainty so that as they invest in the future they will know what rules they are playing by," the EPA's Jackson said.

Fuel economy standards were first imposed on U.S. automakers in the 1970s. The aim was to make cars more efficient and reduce the nation's dependence on foreign oil at time when the Arab oil embargo was creating gasoline shortages. The administration says this is the first update in decades.

The National Highway Traffic Safety Administration will enforce the standards, calculating the average mileage of cars sold by each automaker. Automakers can be fined if they don't comply.

The requirements, which can be imposed without congressional approval, will be reviewed in 2018 and could be reduced if the technology isn't available to meet the standards.

The rules are tough, but General Motors, the largest U.S. car company, will roll out features to comply, spokesman Greg Martin said.

"Consumers want higher fuel efficiency in their cars and trucks, and GM is going to give it to them," he said.