“Made In America”. More and more that little flag stamped on products is becoming a decision factor for American shoppers. Now, Detroit rap/rocker Kid Rock is looking to make America badass again. 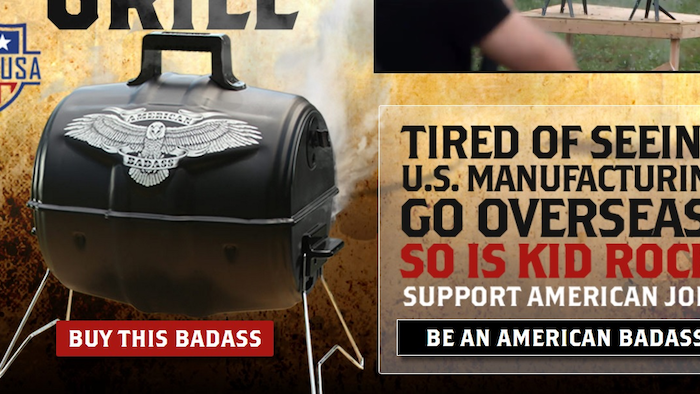 “Made In America”. More and more that little flag stamped on products is becoming a decision factor for American shoppers. Consumer Reports surveys show almost 8 in 10 American  consumers say they prefer to buy an American-made product over an imported one. More than 60 percent are even willing to pay 10 percent more for it.

Many choose to “buy American” as a way to support the economy and promote American jobs. It is not an unknown topic to IMPO readers that the number of manufacturing jobs has been decreasing since the employment peak of the 1970s.

Back then, nearly 20 million American workers were employed in U.S. factories. Now, that number has fallen to 12.3 million. There are many factors that experts say play a hand in the decline of manufacturing jobs — such as advancements in automation and global trade agreements. The notion of sending jobs away to Mexico and China is a common one, and one that was touted again and again on the campaign trail of current President Donald Trump with the slogan “Make America Great Again”.

Earlier last week, the musician introduced the world to the American Badass Grill via his social media channels.

The product comes with a message to keep jobs in America. The company’s website states the grills will be 100 percent manufactured in the U.S. Well, mostly. According to the company’s FAQ page, the charcoal grill is “proudly manufactured and assembled right here in the USA.” While the gas grill counterpart is made in the U.S. with primarily domestic components. The company states two components — a propane regulator and gas tube — are currently manufactured overseas. However, they are seeking U.S. manufacturers who can offer high quality products at a fair price. They even include an email address for companies to contact them.

“American Bad Ass” was a single released by Kid Rock in 2000.

Bringing manufacturing back to the U.S. seems to be a growing trend. Last year, several shoe companies announced plans to build factories in America bringing those jobs back to U.S. soil. And data released by the Reshoring Initiative showed more than 260,000 jobs have been brought back to the U.S. from offshore as many manufacturers are starting to consider the benefits of reshoring.