There seems to be big business in bringing back once-loved products, as foods and drinks you enjoyed as a child seem to be intimately connected with memories shared with family and friends. But the latest (rumored) resurrection is the popular '90s clear soda, Crystal Pepsi. 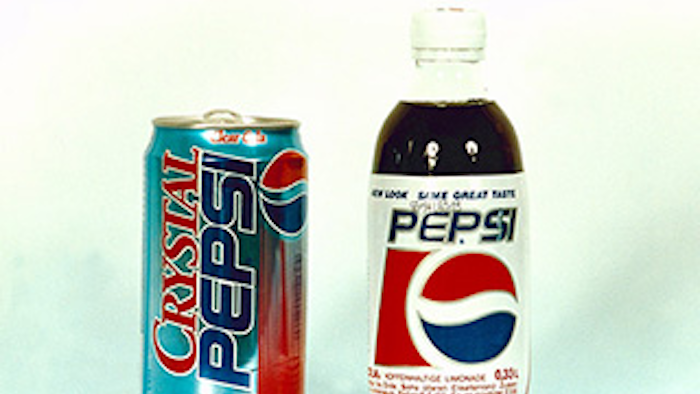 There seems to be big business in bringing back once-loved products, as foods and drinks you enjoyed as a child seem to be intimately connected with memories shared with family and friends.

The food industry seems to be catching on to the power of nostalgia, as many companies have recently brought back popular brands of the past.

In Sept. 2014, Coca-Cola announced the rebirth of Surge, leaving thousands of passionate fans to take a trip down memory lane with just one sip of the Mountain Dew-like, citrus-flavored soda.

Then, just one month later in October, Mars Chocolate relaunched its Crispy M&M's.

Also read: Bringing Back a Brand: The Power of Social Media

But the latest (rumored) resurrection is the popular '90s clear soda, Crystal Pepsi.

The 1990s-era cola was first introduced in 1992 but only lasted a few years on the market. Yet, despite its short lifespan, the soda still managed to gain a loyal following of consumers who have continually lobbied PepsiCo to bring it back.

But with no such luck, one die-hard fan, Kevin Strahle, a professional competitive eater, took it into his own hands.

Strahle (aka L.A. Beast) has been on a mission to bring back the soda for years now, ever since a video of him drinking a 20-year-old bottle of Crystal Pepsi went viral in 2013. But recently, he sent a letter to the beverage giant and it was met with the strongest signal yet that Crystal Pepsi might be making a comeback.

Just received this from @pepsi on twitter a min agoIt is my duty to share it with all of you. #BringBackCrystalPEPSI pic.twitter.com/hyTbH5spbL

"We've had customers ask us to bring back their favorite products before, but never with your level of enthusiasm and humor," Pepsi wrote in its reply to Strahle. "We're lucky to have a Pepsi superfan like you on our side."

While Pepsi confirmed the authenticity of the letter to CNNMoney, they declined to comment on any further details.

Pepsi spokesperson Angela Tucciarone left the fans with, "We take customer feedback very seriously and we do think Crystal Pepsi fans will be happy with what we have planned."