In The Driver's Seat 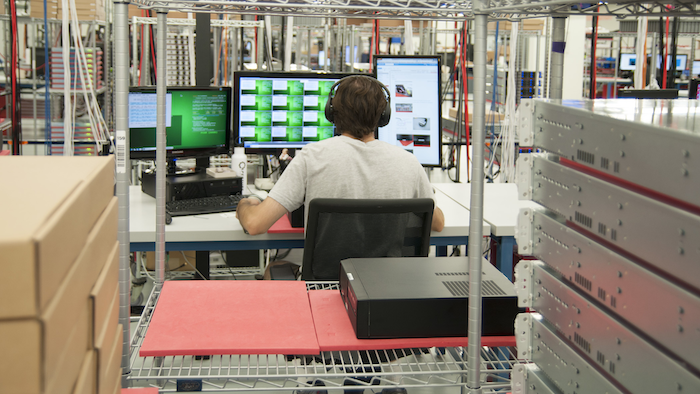 Chicago-area MBX Systems designs and manufactures application-optimized hardware appliances for some of the largest and most demanding independent software vendors and service providers in the world. MBX delivers turnkey hardware solutions that are 100 percent customized to enhance the performance of the application it’s running. The company also offers value-added services such as branding, software imaging, regulatory/ compliance, global logistics and warranty support.

Like most companies riding the wave of the technology boom, business has been good and, for MBX, the move into a larger facility in 2012 was an opportunity to increase capacity. But much like any expansion, the shoe didn’t exactly fit just right at first. For starters, the eightfold expansion of its manufacturing floor meant MBX initially gained more square footage than it could use right off the bat. This, coupled with the expense of the move, meant profits for the upcoming year would take a hit.

Company leaders began to put their heads together to determine creative ways to offset some of this margin erosion headed into 2013, the results of which were beyond anyone’s expectations – and they took the shape of the “Net Driver” program, a modern day suggestion box, with a twist.

While the NASCAR-inspired logos that adorn the Net Driver program hats and other promotional items might make you think of race cars, the real focus of this program is not about driving. It’s about driving out waste.

According to company CFO Len Petty, the program was born in an effort to get back to the basics of operational improvements. “My thought was — let’s get our focus back, in the new building, on the things that help make us profitable and successful,” he explains. “There weren’t many magic bullets, but it was just more about raising awareness of things we could do. So we decided to have a little bit of fun with it.

“Early in the year at our first company meeting, we talked about the program, and the idea was just to raise awareness wherever we could around driving waste out of the business, and look for ways to do things better. We pretty much opened it up to everybody. Not with a formal suggestion box, but with more of a mindset so the Net Driver words (became embedded in the culture).”

So the program - dubbed Net Driver for its goal of boosting the bottom line - was initiated as a cultural endeavor where employees were at the forefront of driving change for the better. The marketing department got to work designing a logo for hats and coffee mugs and the leadership team went about spreading the word. The idea here was that each employee, in all facets of the business, could begin “driving the net” by taking a good look at his or her process and identifying areas for waste reduction. The benefits for employees were evident — MBX has a profit-sharing program in place where five percent of its profits are shared amongst all associates, making this opportunity a fun challenge with real rewards.

And according to Petty, it really came from all areas of the business — some small and some large, but all contributing to the success of it. He describes the fun in “catching people doing things right.” Marketing manager Liz Molli and her team had some Net Driver coffee mugs made, so “when I caught somebody (generating) a great idea, I’d put on my hat, grab a Net Driver mug, and go out and see them,” he says. “(We’d) talk to them and ask them how they got the idea… I’d hand them the mug, and it would be a little bit of recognition on the spot. Over the course of the year, we distributed about 25 mugs.”

And while hats and mugs might sound like small potatoes, the bounty of this program was much more substantial. Ultimately the Net Driver program is credited with saving more than $700,000 and increasing net profit nearly 23 percent. In 2013, the savings included:

One of the biggest improvements was on the manufacturing floor, where production folks and engineers put their heads together to roll out the “Super Cell” manufacturing concept — a time saver that took advantage of MBX’s additional floor space. One process that was consuming tons of man-hours had to do with loading the software systems. A limited number could be addressed at a time, and there were multiple keystrokes an operator would have to do. “With the Super Cell, we were able to design a space on the floor where the racks were on carts and the carts could be rolled into position, plugged in from the back, and then the operator who is doing the configuration along with the software can control multiple systems with one keystroke, so it was a combination of efforts,” explains Petty. “Where they used to be able to do, maybe, eight at a time, now – if we’re fully loaded – we can actually do up to 400 at a time.” For a manufacturer that prides itself on its scalability, this development was invaluable for the long term. An added benefit, says Petty, is that a lot of the quality checks could be done at the same time, without having to move the systems again. “So when the configuration was done, it moved over to the quality people, who could also do their quality checks without having to go into the systems again.”

Petty also stresses the other areas of the business where this cultural shift towards driving out waste resulted in an all-hands-on-deck approach. For example, in sales, better pricing and budget awareness resulted in managers who were really engaged in the budgeting process and asking questions, learning more, and diving into more detail so they could be more aware of how to improve. “I even gave a Net Driver mug to our banker because he gave us an interest rate reduction,” adds Petty. “In engineering (we discovered) an ability to charge for some of our services where we weren’t identifying the value of those before. In the warehouse – using the 5S technique and getting some more tools – pallet banding, and things like that, to save time while they were doing their shipments.”

Petty and Molli attribute much of the success of this program to the fact that somebody was listening to the folks who had the most insight into their own operational areas. Molli says, “It is an open communication, and people who are on the front line in assembly or configuration, because they work with the materials day in and day out, they’re the ones that can come up with the improvements that can quicken the process, or make things a little more productive overall.”

And the company hopes the existing momentum, along with training its new hires on this cultural highlight, will mean the Net Driver program continues to yield fantastic results into the future. “What’s amazing that it’s not a super formal thing; it’s really just a cultural thing,” says Petty. “And just by having a little fun with it and making sure everybody is engaged, it was able to get a life of its own.”