Jack Link’s of Minong, WI brings precision – and fun – to the art of jerky-making. 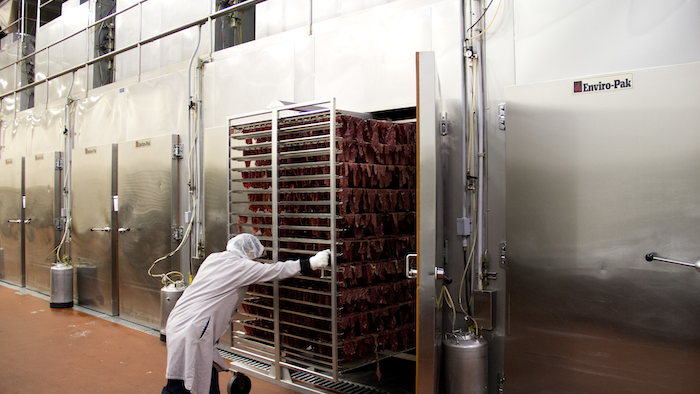 Jack Link’s of Minong, WI brings precision – and fun – to the art of jerky-making.

A wide variety of Jack Link’s Protein Snacks can be found at most grocery stores, convenience stores and mass merchandisers across the United States — and beyond.

The company’s signature television commercials featuring the much-beloved Sasquatch have been wildly successful since making their debut in 2006. And the company’s status as the U.S. market leader — and a fast-growing global force — in the booming $2 billion meat snacks category cannot be denied.

Those achievements represent quite a journey for Jack Link’s, a company whose family roots — and meat recipes — were firmly planted in northern Wisconsin in the 1880s by Chris Link, long before it evolved into a commercial operation established by his great-grandson, Jack Link, in the mid- 1980s. Three decades after Jack Link’s started making meat snacks and selling those products to small stores in northern Wisconsin, the company — whose headquarters reside at One Snack Food Lane in Minong, WI. — now produces more than 100 products, and counts 3,500 employees across multiple facilities in the U.S. and overseas.

“It really doesn’t surprise me. To me, it was all about the quality and staying consistent,” Jack Link’s Executive Vice President of Operations Terry Smith says of the company’s growth. “Of course, our branding and Sasquatch are fun, but it just comes back to health, quality and a great snack.”

As the popularity of the meat snacks category has soared over the last decade-plus with consumers gravitating toward high-protein, low carb, on-the-go products such as jerky, Jack Link’s has ridden that wave of growth. “In (the last) ten years we’ve almost doubled from what we made in pounds versus what we make today with jerky, sticks and steaks,” says Smith, who estimated that the company has added approximately 1,200 employees during that time frame. “Every year (in the last decade) we’ve increased double digits in sales.”

Jack Link’s plans to continue building on that momentum for the remainder of 2015 and beyond with the introduction of new products, a multifaceted brand refresh and by celebrating beef jerky and meat snacks in the form of June’s fourth annual National Jerky Day.

The word quality is a regular — and often repeated — part of the lexicon at Jack Link’s. And quality is non-negotiable as it relates to the company’s products, Smith said. “Jack Link’s was the pioneer of quality, of making that consistent,” says Smith. “It’s is how we grew from where we were in those humble beginnings to where we are at today.

“That’s how Jack Link took the company from the 1980s to where we are today. He never wavered (on quality) and none of us did either. To us, it’s all about ensuring we protect the brand, protect our consumer and deliver high quality products every time.”

Another Type of Commercial Success

In addition to quality, there is another prominent keyword at Jack Link’s: fun. And when it comes to fun, the company has focused on that avenue when it comes to its marketing approach — particularly through the iconic Messin’ with Sasquatch advertising campaign that debuted nine years ago.

While Jack Link’s corporate headquarters, along with a production facility, are located in Minong, the company has a significant footprint across the Midwest. When it comes to expansion, there is no better example than the Alpena facility. The largest of the Jack Link’s production facilities — at approximately 140,000 square feet — occupies a significant parcel of land in a city with a population of less than 300 in rural Jerauld County.

Jack Link’s first arrived in Alpena in 1994 when it purchased a small beef jerky manufacturer that employed both Smith and current Alpena plant manager Rick Tebay. Five years later, the company built a new state-of-the-art plant on a 70-acre site along 221st Street that was formerly an alfalfa field. The facility has expanded several times since — an 80,000-square foot addition at the end of 2000, a 40,000-square-foot addition that added warehousing and packaging capacity in 2005-06, and most recently a 20,000-squarefoot expansion in 2012-13 that resulted in space for six additional smokehouses and more processing and cooler space and brought the facility to its existing 140,000-square-foot dimensions.

“As sales would continue to grow, of course we had to expand capacity,” Smith says. “Alpena was a great site for that. We have plenty of land, great work ethic from the people and the desire to build and to grow from the Alpena team has been fabulous. The team has grown and capacity has grown along with sales. There’s a lot of fun when that happens.”

The Alpena facility, which operates around the clock seven days a week, employs approximately 900 people and produces approximately 600 SKUs. The Alpena facility also features a shelf-life room, a large space where packaged product from every lot is stored. The product is tested and tasted at three-month intervals throughout the course of its 18-month shelf life.

A recently completed $12 million wastewater treatment plant at the Alpena facility is the one of the company’s newest sustainability efforts. The project allows the facility to emit clean wastewater and produce methane gas for use as a renewable energy source.

“Just our volume here, in a town (the population of Alpena), you would have to do something to the infrastructure for the wastewater just having 900 people live here,” says Smith. “Well, 900 people are here, basically, all week long. So you have to do something from that standpoint, let alone the processing and the volume of the product that we put through here.

“We never thought we would have grown as much as we have. So we were always catching up to our wastewater problems. Finally, we put in a system that can handle not only this growth, but also about another 40 percent The wastewater treatment plant will be self-sustainable, as far as electricity, and we’ll actually put power back on the grid and we’ll get credit for that.”

The Alpena plant is a zero-waste-to-landfill facility that ships its recyclable materials to various recycling facilities. Smith also said the company is also looking at the possibility of using wind energy in some fashion at the Alpena facility.

That type of commitment to sustainability stretches across the company. “I look back at Jack Link’s being a high-quality brand and a healthy brand, so we want to do the right thing by the environment, we want to be sustainable,” Smith says. “Not only is it the right thing to do, it’s just what you should do for business. The first thing we went after was looking at all of our landfill expenses to figure out how we could eliminate them. We take corrugate, recyclables and excess film to Mankato (for our) waste-to-energy program. (Also) reduction of water, putting water chillers in whenever we can, different filtration systems, new lighting, high-efficiency HVAC and switching from propane to natural gas. These are all the right things to do for the environment and they were led by good business decisions. We clearly want to do the right things for the environment, we want to be sustainable and we want to be able to do it without a huge detriment to the consumer. So when you can do it in an efficient manner and do the right thing, it’s definitely what you should be doing.”

To that point, Jack Link’s was recognized by the Wisconsin Sustainable Business Council as a 2014 Green Master as part of the WSBC’s Green Masters Program. To earn Green Master recognition, Jack Link’s Wisconsin facilities were judged on a comprehensive range of sustainability actions, and scored in the program’s top 20 percent. The sustainability efforts at the Minong operation included the construction of a 13-mile gas pipeline in 2013 that resulted in a significant reduction in the facility’s carbon footprint and greenhouse gas emissions while bringing cleaner energy to the area. The New Glarus facility achieved zero-waste-to-landfill status in both 2013 and 2014. Both facilities were in line to receive high-efficiency HVAC upgrades this year, as well. As a company, Jack Link’s has also worked closely with its customers to reduce bag sizes in order to reduce landfill waste.

The beef jerky production process stretches from one end of the Alpena facility to the other as raw materials are transformed into packaged product before being transported to the Iowa distribution centers.

All told, the process that transforms raw meat into beef jerky takes between five to seven days, according to Tebay. Several truckloads — each containing 40,000 pounds of meat — are delivered to the facility each weekday, with a smaller number of truckloads arriving on weekends.

While the Alpena facility produces approximately 75 percent of the company’s beef, chicken, turkey and pork jerky. For jerky, the beef cuts consist of the leanest meat, which is ideal for the highest quality jerky. Jack Link’s sources its beef almost exclusively in the U.S. in the form of leaner, grass-fed cows. “We’re buying from anywhere from North Dakota to California, Texas, Florida,” Smith says.

Raw materials are dropped off at an unloading area at one end of the facility. Upon arrival, the meat is weighed, visually inspected, probed for temperature, scanned into the plant’s system and tagged appropriately.

The meat remains in the marination cooler between 24 and 72 hours, based on the specific product specification, before moving on to the next step of the process. When the meat leaves the marination cooler, it advances to the processing room where pieces of meat are transported via an overhead conveyor line and fed into a slicer. From there, the sliced meat travels on another conveyor to an area where employees hand-hang slices onto rolling trucks. When those trucks are full, they are taken into a staging area for the smokehouse, where the meat is cooked.

Once in the smokehouses, the jerky cooks for between 3-10 hours depending on the specific product. Though Tebay says the average smokehouse time is between four to four-and-a-half hours. The smokehouses at the Alpena facility have the ability to use both liquid smoke and natural smoke. After leaving the smokehouse, the jerky is taken to another holding area, where it cools to room temperature before moving on to be packaged.

Package sizes range anywhere from less than an ounce all the way up to one pound. Alpena’s 11 packaging lines, when running at full capacity, have the ability to package 860 bags of product a minute. The fastest lines have the capability to package 100 bags a minute. On its way to being packaged, the jerky is twice subjected to metal detection to ensure safety, and bursts of nitrogen are injected into the package at two points during the process. This is done to help keep oxygen levels extremely low inside the package to ensure the jerky’s shelf life, which is 18 months. Each packaging line also uses a checkweigher to account for consistency. Packages that are too heavy, or too light, are automatically rejected and the product is reworked.

Quality checks take place every 5-10 minutes on the packaging line, and one specific test analyzes oxygen content, with the ideal range checking in at less than one percent. “We pride ourselves on quality,” Tebay says. “We have a lot of quality checks, double and triple checking to make sure everything is right.”

It's been a rough two years for the chipmaker.
Jan 13th, 2021
Follow Us
Most Recent