Why Nitriding Steel Is Growing In Popularity

Nitriding has continued to evolve from its roots of accidental discovery in early 20th century metallurgy. Today, the process is becoming chosen for a broadening variety of parts and applications across industries due to its relatively low temperature and precision. 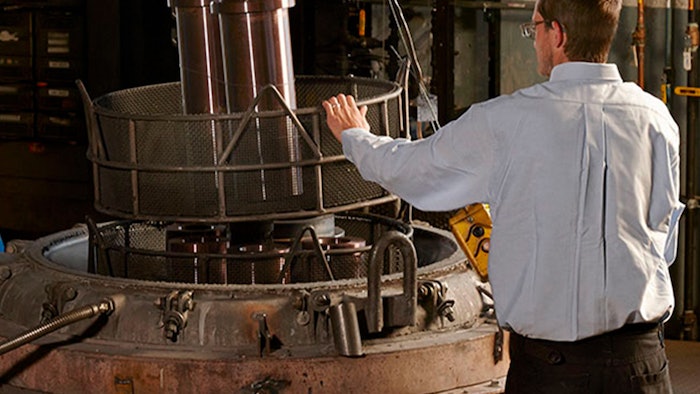 A case-hardening technique in use since the early 20th century, nitriding steel has been an effective lower-temperature heat treatment for workpieces since even before engineers and metallurgists fully understood it.

Its appeal lies in the ability to harden a part by dissolving nitrogen into its surface without austenitizing, thus all but eliminating the risk of distortion. That opened the door for improving an ever-widening variety of parts. Its popularity grows as the industry realizes the technique is effective across a broad variety of parts and applications.

Metallurgist Adolph Machlet developed nitriding by accident in 1906. That year, he applied for a patent that called for replacing atmosphere air in a furnace with ammonia to avoid oxidation of steel parts. Shortly after he sent the patent application off, he noticed that treating parts in an ammonia atmosphere at elevated temperatures caused a “skin, casing, shell or coating” to develop around a piece that was extremely difficult to corrode or tarnish.

Also in 1906, German metallurgist Adolph Fry led a research program during which he made the same discoveries Machlet made. He also noticed that adding alloying elements to iron heavily influenced the results of nitriding.

Machlet’s patents for nitriding in the U.S. were approved in 1913 and 1914; Fry received patents in Germany for his process in 1924.

The process of nitriding steel begins by heating parts in a furnace to a relatively low temperature (between 950 and 1,100 degrees Fahrenheit, depending on a part’s intended use) compared to other heat treatment methods. At these low temperatures, the iron remains ferritic — that is, the phase changes that alter the structure of the iron do not occur.

But the temperature is high enough for ammonia molecules injected into the furnace to break apart once they contact the workpiece. That breakup releases nitrogen atoms, which dissolve in the steel and form the desired diffusion zone. A minimal intermetallic compound layer also forms.

One benefit of nitriding steel as opposed to using other heat treatments is that modern nitriding equipment allows for computer-controlled injection of ammonia to achieve varying case depths. Another is that parts are slow cooled rather than cooled rapidly via quenching, a process that further limits the risk of distortion.

The precision of the process is such that parts’ intended qualities are achieved in a single step; they do not need to be softened down to specifications via tempering.

Because nitriding steel workpieces offers superior surface qualities with minimal risk of distortion, the process has become a mainstay treatment of parts across a variety of industries:

Expect to see the popularity of nitriding to continue to increase. The techniques and technologies in play will only get better; the process will only become more precise. If engineers haven’t considered new material and design possibilities that can arise from specifying nitriding, now is a good time to start.

Rob Simons is a metallurgical engineer specializing in ferrous heat treatments with 35 years of experience in the industry. He earned a degree in metallurgical engineering from the University of Missouri — Rolla in 1982 and will be a featured presenter at the ASM Heat Treat 2017 conference. He has been at Paulo for 30 years. Founded in 1943, Paulo is one of the largest providers of heat treating, brazing and metal finishing solutions in North America. Headquartered in St. Louis, Paulo operates five divisions servicing the mid-west, great lakes, and southeast regions of the United States.