Is 3DP Right for Your Company?

Additive manufacturing is showing signs of triggering transformations in U.S. industrial manufacturing, from product design and production to restructured supply chains. What should your company know before implementing a 3D printing strategy? 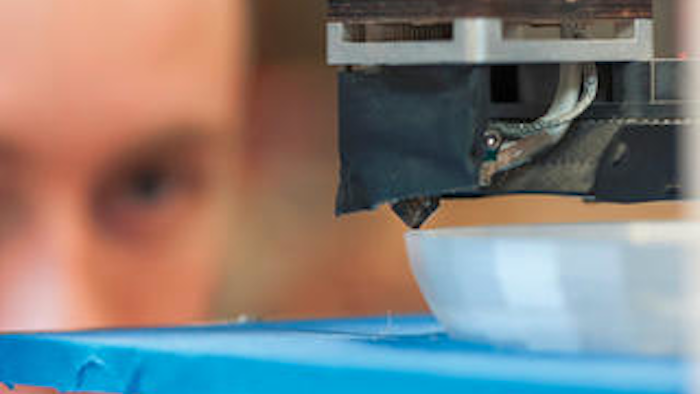 3D printing (3DP), also known as additive manufacturing, is showing signs of triggering transformations in U.S. industrial manufacturing, from product design and production to restructured supply chains, according to a report released today by PwC US in conjunction with The Manufacturing Institute.

The report, 3-D printing and the new shape of industrial manufacturing, which includes findings from a survey of over 100 industrial manufacturers, revealed that two-thirds (67 percent) of manufacturers surveyed are currently implementing 3DP either by experimenting with the technology or by already using it for prototypes or final products. One in four respondents said they plan to adopt 3DP in some way in the future.

“Applying 3DP for rapid prototyping is nothing new for many manufacturers as it enables them and their suppliers to sidestep the often laborious and costly traditional processes,” said Bob McCutcheon, PwC’s U.S. industrial products leader. “However, we’re starting to see signs that the technology is on the cusp of becoming mainstream, and companies need to understand the disruptions and the opportunities that it could create. There are core questions all manufacturers ought to be asking themselves if they’re looking to implement a 3DP strategy that could potentially expand their business and makes them more competitive in the marketplace.”

3DP can accelerate new product development cycles, which ultimately could translate into getting new products to market more quickly and frequently, especially when prototyping complex products. According to the survey, 25 percent of manufacturers are currently implementing 3DP technology for prototyping only, 10 percent are using 3DP for both prototyping and the production of final parts, and only one percent is using it for final production.

Typically in the manufacturing sector, going from 3DP-produced prototype to final product has largely been confined to specialized, low-volume and customized products. In fact, the survey showed half of manufacturers said that it is likely or very likely that 3DP will be used mostly for low-volume, highly specialized product over the next three to five years.

3DP is also opening the doors to the “lot of one” model, allowing companies to avoid producing products that are unpopular and only print those products that are making inroads to customization of popular products. The technology could also impact the after-market of products, particularly for manufacturers of products with long lives and a high demand for parts replacement and repair and even for obsolete parts. According to the survey, 70 percent of respondents believe that in the next three to five years, 3DP will be used for obsolete parts while 50 percent believe it’s likely that the technology will be used for production of after-market products.

“Companies investing in 3DP hardware and the talent to run it are seeing gains in speed and flexibility in R&D, in addition to anticipating savings in materials, labor and transportation costs,” continued McCutcheon. “However, as organizations wade into 3DP either through implementing or at least through experimenting and/or assessing potential applications, the technology at present is still limited in the size, strength, and complexity of the products it can produce, even as it picks up steam as a powerful tool.”

Almost half (47 percent) of the manufacturers surveyed identified the top barrier to implementing a 3DP strategy is the uncertainty of a 3D printed products’ quality, followed by lack of talent to exploit the technology (45 percent). Intellectual property protection is another potential concern, where CAD-files, 3D scanners and printers could open the door to patent infringement. In addition, manufacturers are wary about how well printed parts or components can perform, and whether they will gain certificate or approval for use by regulated bodies.

The adoption of 3D printing also raises the question of if the supply chain will be shortened to almost one link – eliminating those connecting development, prototyping, production, delivery and warehousing of parts. The survey showed that 30 percent of manufacturers believe that the greatest disruption to emerge from widespread adoption will be “restructured supply chains.”

“For some industries and some products, the concept of ‘on-demand’ manufacturing could radically change business models and supply chains. We’re also seeing that the supply chain has become more local as the adoption of 3DP widens and as more companies are manufacturing closer to the end customer,” said McCutcheon.

A big part of manufacturers’ 3DP strategy will be re-training the existing workforce or drawing in new talent with the skills to create digital designs as well as oversee the printing production. A future of “printer farms” with dozens of printers overseen by only a handful of workers also raises the possibility of losing manufacturing jobs to laborsaving technology. Thirty-seven percent of manufacturers attributed their “lack of current expertise in our company to fully exploit the technology” as another top barrier in implementing 3DP in their business.

“We don’t believe 3DP adoption will significantly affect manufacturing jobs overall -- it’s more of a shift in the demands for more workers with technical know-how,” said Gardner Carrick, Vice President, The Manufacturing Institute. “The advancement in technology and how it’s changing the image of manufacturing for next generation employees is attracting a new skillset that’s necessary on the shop floor. It’s the perception of manufacturing jobs becoming less blue collar and more white collar.”