In a nutshell, there are three accounts to the triple bottom line (TBL) — People, Planet and Profit. Profit is often formulated by a team of accountants and carefully monitored by management, but what about the other two components? 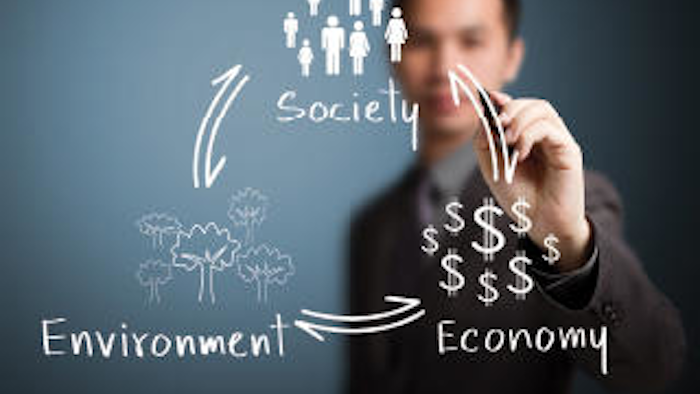 The triple bottom line is a term that was coined in the 90’s. In a nutshell, there are three accounts to the triple bottom line (TBL) — People, Planet and Profit. The conventional wisdom is that a combination of these three components leads to a successful company that retains employees, partners and clients.

Profit is often formulated by a team of accountants and carefully monitored by management, but what about the other two components? The measurement of people and planet is more complex. More recently, managers are taking notice because people care about these two accounts, and those people spend their money where they put their values. This valuation of social responsibility makes its way back to the bottom line by increasing revenues. The planet component leads to the question, “How green is your company?” The people component often relates to the environment in which people have to work. Top CEOs are taking note of this phenomenon and are guiding their companies to address these critical areas. Indra Nooyi, PepsiCo’s top executive and chairman, famously noted, “We must show that corporations can be a force for good in society.”

So how does one increase the value in each of the three components? For industrial plants, the responsibility of increasing the TBL falls to the managers, both operation and maintenance, and the plant engineers. A simple and effective way to increase all components of the triple bottom line is through systems integration. Here we will examine three case studies from three different industries completed by a system integrator, Avid Solutions Inc., and extract each component from the results of the projects. While it is true the components won’t be equal, each garners enough to make a significant difference in the TBL.

The first case study we will examine is that of a coal fired power plant. The intrinsic problem with coal fired burners is controlling the mixture of fuel and air. These are sent to a combustion chamber where they are burned to release energy. This particular plant used pulverized coal as its fuel source, and was being converted to Continuous Combustion Monitoring. Since there is no way to accurately measure the amount of coal flowing into the burners, the system integrator was given the task of developing a meter ing and control system.

The system integrator developed an Air/Fuel ratio meter to measure and control both the density and speed of the coal flow to each burner. The metering was then connected to a damper with the delivery tube in exactly the same way as the mass airflow meter controls the throttle body valve in a car’s engine. Previous meters were only effective with constant airflow, but bends in the intake tubes made old technologies useless. One careful consideration that had to be made is that below a certain airflow velocity, the pulverized coal will fall out of the air stream and accumulate within the pipe, creating perfect conditions for a dangerous coal fire.

People: The savings for this project allowed the plant to further upgrade the process and invest the savings in upgrades at other plant locations. Consequently this provides a better and safer working environment for employees. By having a reportable Continuous Combustion Monitoring system, the plant shows its social responsibility by being in compliance with EPA mandates.

Planet: The carbon footprint of this power plant was reduced without having to buy carbon offsets, and other emissions associated with combustion were reduced as the combustion was more efficient. The solid waste combustion byproduct, known as “slag,” was reduced as well. Slag oftentimes finds its way into landfills.

Profit: In terms of the triple bottom line, profit was most notably increased. The first installation saved the operator $2.4 million in fuel alone in little more than the first year’s operation. When considering a multi-plant operation, this can seriously add to the overall financial well-being of the company.

Our second case study is found at a large pulp and paper company. The task given to the system integrator was to complete a large paper machine project. This client had antiquated drives and controllers, making them expensive to repair and maintain. Their system contained obsolete controllers which were not supported by the manufacturer any longer.  Maintaining the code for these old controllers was also problematic.

The system integrator provided a new machine control system and programming that reliably replicated the functions of the old control system. They also changed out the antiquated drive technologies for a modern one. The connection to the system was upgraded from an old Modbus system to a more reliable and robust Ethernet connection.

People: The maintenance personnel now have a safe and reliable system that is far less prone to failures. The new system allows the plant engineers to easily reference the logic and make changes or troubleshoot. This reduces the stress level of employees.

Planet: By reducing the occurrences of downtime, resources are conserved. Whether the plant is producing or not, water, steam, fuel and electricity are being used. These resources have their own environmental impact that is mitigated when the entire plant is running correctly.

Profit: An unexpected outage at a facility can cost tens of thousands to more than a million dollars per day, depending on the product. Removing this costly downtime eliminates direct costs to products. Controller boards and I/O modules for supported hardware are generally less expensive than parts that have reached their obsolescence. Companies pay a premium for these parts to stay in business. The engineering costs associated with changes or modifications to newer software is reduced because newer software products are simply more user friendly.

In our final case study, the systems integrator was approached by a plant that had a problem most operations managers wish they had, but may be the most difficult to solve. This particular customer is a producer of resin materials for aircraft bodies. The problem was the plant had orders well beyond their production capacity. They were in danger of losing orders and, worse, had the threat of liquidated damages if they did not produce.

The systems integrator and the customer identified the bottlenecks in the system: leachers. The reactors providing the feed and the dryers which received the product had ample capacity; the areas for improvement were not so obvious. An additional reactor was added at the front end, and an additional dryer was added to the back. To enhance this further, a new solvent recovery system was added.

People: By recovering their solvents, the plant becomes socially responsible because resources are conserved. The plant personnel also became benefactors of a new control system where it is easier to accommodate changes and troubleshoot.

Planet: The solvent recovery system is the most obvious return on the environmental investment. Most solvents are considered extremely hazardous wastes and can effect water and air quality.

Profit: Capacity is not yet an issue with the plant. They are able to produce all that is sold and business managers can now plan to take up this excess capacity by accommodating new clients.

Today’s companies must always think in terms of the TBL in order to maintain a profitable, as well as socially and environmentally responsible company. While this article takes a hindsight look at projects, managers must take a forward view in project justifications.

Select a knowledgeable system integrator with the right experience in your field. Make sure they are willing to think outside the box to come up with innovative solutions to your unique problems in your manufacturing environment. While systems integration isn’t a cure-all for a company’s TBL woes, it is a positive step in the right direction.

Mark Adair, CAP, is an automation solution integrator at Avid Solutions, Inc. He has served clients in a variety of industries for more than 20 years as an engineer. For more information about Avid Solutions, visit www.avidsolutionsinc.com.