Supporters of the bill say it will make it easier for workers to form unions and bargain for higher wages. 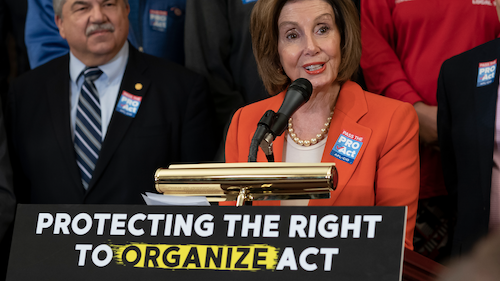 Speaker of the House Nancy Pelosi, D-Calif., joined at left by AFL-CIO President Richard Trumka, speaks during a news conference about the Protecting the Right to Organize (PRO) Act at the Capitol in Washington, Wednesday, Feb. 5, 2020. (AP Photo/J. Scott Applewhite)
Associated Press

WASHINGTON (AP) — In a move that supporters said would help working families, the Democratic-controlled House has approved a bill that would make it easier for workers to form unions and bargain for higher wages, better benefits and improved working conditions.

The “Protecting the Right to Organize" or PRO Act would allow more workers to conduct organizing campaigns and would add penalties for companies that violate workers' rights. The act would also weaken “right-to-work” laws that allow employees in more than half the states to avoid participating in or paying dues to unions that represent workers at their places of employment.

In one of its most controversial provisions, the bill would close loopholes that allow what supporters call intentional misclassification of workers as supervisors and independent contractors in order to prevent them from joining a union.

The House approved the bill, 224-194, on Thursday. The measure is unlikely to be taken up in the Republican-controlled Senate and faces a veto threat from the White House.

Even so, Democrats touted it as a major victory for worker rights and said it would help reverse a decades-long trend of declining union membership in the U.S. workforce. Less than 11% of American workers belong to a union, a statistic Democrats called disgraceful.

The bill's sponsor, Rep. Bobby Scott, D-Va., called labor unions one of the most powerful tools workers have to improve their standard of living. But under current law, there are “no meaningful penalties for predatory corporations that use unlawful tactics to discourage workers from organizing a union,” said Scott, who chairs the House Education & Labor Committee.

“For far too long, workers have been stripped of their voices, losing their power to organize for better wages and benefits,'' said Pocan, co-chair of the Congressional Progressive Caucus. The House bill will allow workers to "fight back against corporations and anti-union special interests that have attacked and eroded the labor movement for decades,'' he said.

Republicans dismissed the bill as a “political gift to union bosses” that would diminish the rights of workers and employers alike while harming the economy.

“Big Labor is in a panic over plummeting union membership,'' said Rep. Virginia Foxx of North Carolina, the senior Republicans on the labor panel. She urged union leaders to “self-correct and increase transparency and accountability,'' rather than spending ”three times as much money on political activity as on ... organizing and representing workers.''

Federal law already protects the right of employees to organize, Foxx said, adding that the House bill would require employers to hand over workers’ personal information to union organizers, allowing them to "target, harass and intimidate workers.''

If the House bill becomes law, "workers will be forced to take money from their paychecks and give it to labor unions even if they don’t want to be represented by a union,'' she said, noting that the bill is opposed by small business owners, trade associations and other business organizations.

The White House also objected to the bill. While the Trump administration is willing to work with Congress to strengthen protections for union members, the House bill would kill jobs, violate workers’ privacy, restrict freedom of association and roll back the administration’s deregulatory agenda, the White House said in a statement.

The Democratic bill “appears to cut and paste” core provisions of a controversial California law that “severely restricts self-employment,'' the White House said. The California law, known as Assembly Bill 5, “is actively threatening the existence of both the franchise business sector and the gig economy in California,'' the White House said, adding that it ”would be a serious mistake for Congress to impose this flawed job-killing policy on the entire country.''

The California law has drawn nationwide attention for its attempt to give wage and benefit protections to people who work for ride-share companies such as Uber and Lyft. The law also applies to freelance journalists, despite complaints that it could put some out of work.

Under the PRO Act, employers would not be allowed to force workers to attend anti-union meetings and would face penalties for violating workers' rights.

“It’s time to give workers the tools they need to survive in an economy rigged against them,'' Pocan said. "Every worker deserves to have a union.''