Dennis Williams, who turns 68 next week, tried to portray himself as a reluctant participant. 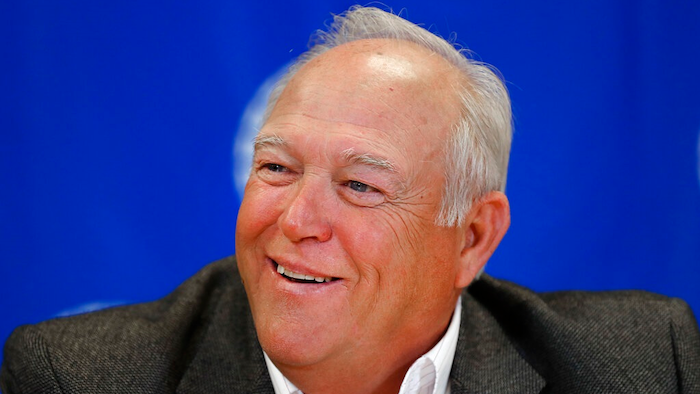 In a Thursday, Feb. 16, 2017, file photo, then-United Auto Workers president Dennis Williams speaks during a roundtable with reporters in Detroit. Prosecutors are seeking a two-year prison sentence for Williams, a former president of the United Auto Workers who they say had "two lives" — as a leader of a blue-collar union and a connoisseur of premium champagne and California vacation villas paid for with members' dues the U.S. attorney's office said in a court filing Monday, May 3, 2021.
AP Photo/Paul Sancya, File

DETROIT (AP) — Prosecutors are seeking a two-year prison sentence for a former president of the United Auto Workers who they say had “two lives" — as a leader of a blue-collar union and as a connoisseur of premium champagne and California vacation villas paid for with members' dues.

“Future leaders must understand that substantial abuses of this trust — especially ones by the senior most leaders — will be severely punished," the U.S. attorney's office said in a court filing Monday.

Dennis Williams pleaded guilty last year to an embezzlement scheme that turned union dues into a pot of cash for golf, lodging and fancy meals. Four bottles of champagne, for example, cost $1,760. He will get his sentence on May 11.

Williams, who turns 68 next week, tried to portray himself as a reluctant participant. But the government said he came up with ways to conceal the spending.

“Dennis Williams tried to live two lives,” prosecutors Steven Cares and David Gardey wrote. “On the one hand, at public events, he excoriated the things that were ‘wrong in the United States of America’ because union members ‘cannot buy the things they build.’ But in private, he exploited the hundreds of thousands of UAW members that he led.”

Williams' lawyers said he has repaid $132,000 to the UAW, which he led from 2014 to 2018. They're asking for a prison sentence of a year and a day, which would qualify him for good behavior credits and a shorter stay.

“Mr. Williams has taken all possible steps to right his wrongs. ... When pleading guilty, Mr. Williams spoke at length regarding his deep regret for his misconduct, apologizing to the UAW, his family, friends, and this court,” attorney Terra Reynolds said in a court filing.

Williams wasn’t the only former president caught in corruption. His successor and golf pal, Gary Jones, also pleaded guilty and awaits a sentence.

Eleven union officials and a late official’s spouse have pleaded guilty since 2017, although not all the crimes were connected. The first wave of convictions, which included some Fiat Chrysler employees, involved taking money from a Fiat Chrysler-UAW training center in Detroit.