His comments come as Amazon workers in Alabama will decide whether they should unionize. 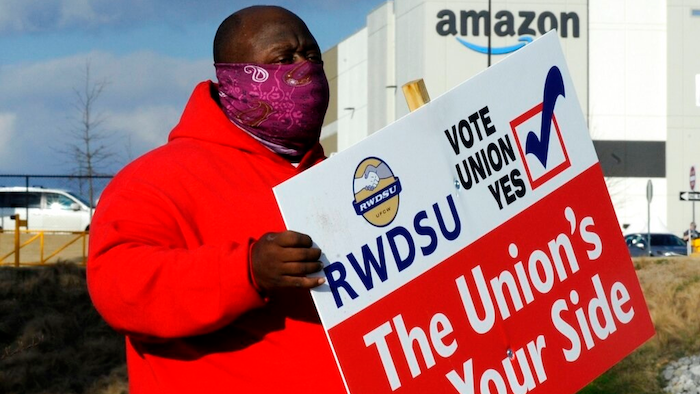 Michael Foster of the Retail, Wholesale and Department Store Union holds a sign outside an Amazon facility where labor is trying to organize workers on Tuesday, Feb. 9, 2021. President Joe Biden said workers in Alabama and across the country have the right to join a union without intimidation from their companies. His comments come as Amazon workers in the state are voting on whether they should unionize. In a two minute video posted to Twitter, Biden didn’t mention Amazon by name, or say how workers should vote.
AP Photo/Jay Reeves, file

NEW YORK (AP) — President Joe Biden said workers in Alabama and across the country have the right to join a union without intimidation from their companies. His comments come as Amazon workers in the state are voting on whether they should unionize.

In a two-minute video posted to Twitter, Biden didn’t mention Amazon by name, or say how workers should vote, but he stressed that they should be given a choice.

At the Bessemer, Alabama, warehouse, Amazon has been holding classes, telling workers that the union will take their money for dues without any benefit.

When asked about the video in a briefing Monday, White House Press Secretary Jen Psaki said the president believes that workers should have the right to organize, but wouldn’t comment specifically on Amazon because the White House doesn’t comment on specific cases that are before the National Labor Relations Board.

The union push in Bessemer is the biggest in Amazon's nearly 30-year history. About 6,000 workers started voting in February, and have about a month left to make their choice. Vote counting starts on March 30, and a majority of the workers have to vote “Yes" in order for them to unionize.

Organizers have said workers in the Amazon warehouse don't get enough breaks during their 10-hour workdays. They also want workers to be treated respect and to be paid more. The employees are seeking to be represented by the Retail, Wholesale and Department Store Union, which also represents workers at several poultry plants in Alabama.

Workers face an uphill battle against Amazon. The company, which is the nation's second-largest employer, has a history of crushing unionizing efforts at its warehouses and its Whole Foods grocery stores. Plus, laws in Alabama don't favor unions.

The Seattle-based online shopping giant did not respond to a request for comment Monday about Biden's video. Amazon has previously said that union organizers don’t represent the views of the majority of its employees, and that it already offers what unions want: starting pay of $15 an hour and other benefits.

Stuart Appelbaum, the president of the Retail, Wholesale and Department Store Union, said in a statement the video was a clear message of support for the Bessemer workers: “As President Biden points out, the best way for working people to protect themselves and their families is by organizing into unions. And that is why so many working women and men are fighting for a union at the Amazon facility in Bessemer, Alabama.”

The Amazon workers have received support from other high-profile names, including Vermont Sen. Bernie Sanders and Stacey Abrams, the one-time candidate for Georgia governor who has become a leading voice on voting rights.

Where Are the Workers?

The watch on her wrist is a reminder "that we need to do more to get good manufacturing jobs."
Oct 18th, 2021

The plaintiffs include people who have some of the highest security clearances in the nation.
Oct 15th, 2021

It's often more important than if their work was completed on time, on budget and satisfactorily.
Oct 14th, 2021

The decline in layoffs comes amid an otherwise unusual job market.
Oct 14th, 2021
Follow Us
Most Recent