Layoffs are slowing, unemployment is declining and hiring is gradually rising. 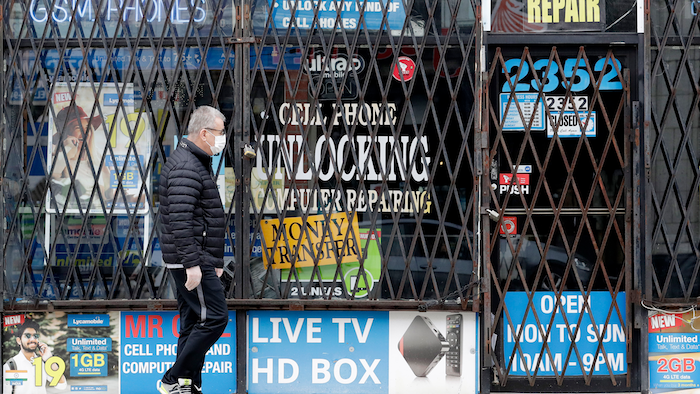 A man walks by a closed store.
Associated Press

WASHINGTON (AP) — Layoffs are slowing, unemployment is declining and hiring is gradually rising, suggesting that a steady rebound may be afoot in the U.S. job market.

So many uncertainties are overhanging the economy that no one knows whether hiring will expand steadily in the months ahead or merely plateau as employers recall only enough of their laid-off staffers to partially reopen for business.

The most dangerous risk is that the coronavirus will roar back with renewed intensity, forcing millions of businesses to shut down again and resume deep job cuts.

The outlook is so opaque that at a news conference last week, Federal Reserve Chairman Jerome Powell used the words “uncertain” or “uncertainty” seven times to describe the outlook for economy.

“The extent of the downturn and the pace of recovery," Powell said, "remain extraordinarily uncertain and will depend in large part on our success in containing the virus."

While it’s hard to say what the future holds for America’s roughly 30 million unemployed, here are some key factors that will determine how that future unfolds.

WILL THERE BE ANOTHER WAVE OF THE VIRUS?

On Thursday, stock prices plunged more than 5%, driven largely by reports that the number of coronavirus cases is rising again in much of the United States as more reopened businesses draw customers without the full use of protective masks and social distancing.

An Associated Press analysis this week found that in 21 states, the rolling seven-day average of new cases per capita was higher than the average seven days earlier. In some states, reported cases and hospitalizations surged after state officials lifted their business lockdowns.

Powell and other economists have warned that a second viral outbreak would lead many more consumers to stay home, thereby dealing another blow to restaurants, bars and retailers,and likely causing more layoffs.

WILL MANY COMPANIES GO OUT OF BUSINESS?

Many people who have lost jobs say they regard their layoffs as temporary and that as the economy rebounds, they expect to return to their old employers. This has already happened to some employees of restaurants, retailers and construction companies. If that trend were to continue, it could deliver a relatively fast recovery and a steady decline in unemployment.

Yet as the recession that began in February drags on, more and more of the unemployed will face a tougher problem: They may have no business to go back to.

Coresight Research says it expects 20,000 to 25,000 stores to permanently close this year, up from 9,800 last year, which was itself a record. This trend would mean that hundreds of thousands of jobs wouldn't return. Some companies in the travel and energy industries will likely go out of business in the coming weeks or months.

So far, the pace of business bankruptcies has yet to surge. Amy Quackenboss, executive director of the American Bankruptcy Institute, credits the government's relief efforts, notably its small business lending program, with limiting the number of household and business bankruptcies.

“As this relief runs its course, however," she added, “mounting financial challenges may result in more households and companies seeking the shelter of bankruptcy.”

HOW FAST WILL CONSUMERS RESTART SPENDING?

The lifting of government-ordered shutdowns of nonessential businesses will increasingly allow more Americans to shop and spend. But consumers won't likely return to their pre-pandemic habits of eating out, traveling by plane, going to movies or visiting yoga studios and barbershops until they're confident that they won't be infected. And that would likely require significantly expanded testing capability or the availability of a vaccine.

In the meantime, as long as consumer spending remains subdued, so will hiring. The outlook is particularly dim for businesses that depend on mass gatherings — from concert venues and professional sports leagues to airlines and the film and television industry.

Professional sports, according to analytics firm EMSI, creates up to 1.3 million jobs, some of which are only part time or seasonal. Still, about 3,000 workers are needed to make U.S. Bank Stadium in Minneapolis hum for a Vikings game, for example. It's unclear when or whether all those jobs will return. College sports will be deeply affected, too. To take one example, Iowa State University is considering selling only half the tickets needed to fill its football stadium this fall.

HOW MANY RESTAURANT JOBS WILL RETURN?

As much as it has any industry, the pandemic has devastated restaurants and left their future deeply uncertain. Forced to close their dining rooms to comply with government lockdowns, U.S. restaurants and bars slashed 5.4 million jobs in April, a 45% plunge. Barely 1.4 million of those lost jobs returned in May.

Restaurants are increasingly, if only partially, reopening, in many cases with their indoor dining strictly limited to fewer customers. It’s unclear whether most Americans will regain their pre-pandemic enthusiasm for eating out. Local governments, newly vigilant about a potential resurgence of the virus, may continue to require restaurants to restrict seating capacity.

“A lot of those restaurants may not have been able to carry themselves through the shutdown … or they can’t make a profit on a table setup that is half of what is used to be,’’ said Barbara Denham, senior economist at the commercial real estate research firm Moody’s Analytics REIS.

“Good, well-run restaurants will come back stronger than ever,’’ Sigal predicted. Those restaurants have used the lockdown period to bulk up their takeout and delivery operations.

WILL GOVERNMENT AID END TOO QUICKLY?

Without the nearly $3 trillion in government aid that has been distributed, the unemployment rate would be even higher than its current 13.3%. Just over half the rescue aid has been given to households and businesses, keeping workers employed, mortgages and rents paid and many bills current.

But the economy will likely need another major dose of aid to fuel the recovery, and it’s unknown just how much will be spent or where it would go. The risk is that without more aid soon, a rebound in consumer spending could plateau and hiring gains could shrivel.

House Democrats approved an additional $3 trillion aid package in May. It includes funding for state and local governments, which are starved of tax revenue while facing much higher health care costs. Many states will be forced to lay off workers.

But White House officials and Republican lawmakers have resisted that package and signaled that they want to take time to see how the economy is faring before approving more money.

WILL DOWNTOWN BUSINESS DISTRICTS HOLLOW OUT?

The pandemic disrupted the basics of commerce. Workers stopped going to offices. Bars and restaurants lost their lunch and happy hour crowds. Fitting rooms at clothiers became a possible health risk. Many cities long ago based the economic redevelopments of their city centers around restaurants, coffee shops and yoga studios — in-person services that won't fully return for the foreseeable future.

Without the recovery of those businesses, many jobs that revolved around downtown commerce won't return, either.

Starbucks is shifting more toward a takeout model, eschewing the original vision of an Italian coffeehouse where drinkers could freely linger. Among smaller businesses, about a quarter of restaurants and bars are still closed, and roughly half of leisure and hospitality retailers are shuttered, according to Homebase, a scheduling and worker management company.

Workers have been steadily returning since early May, Homebase's data shows. That progress may not last, though, if downtown neighborhoods don't soon regain their former vibrancy.