Property traced to law violations is “subject to forfeiture to the United States." 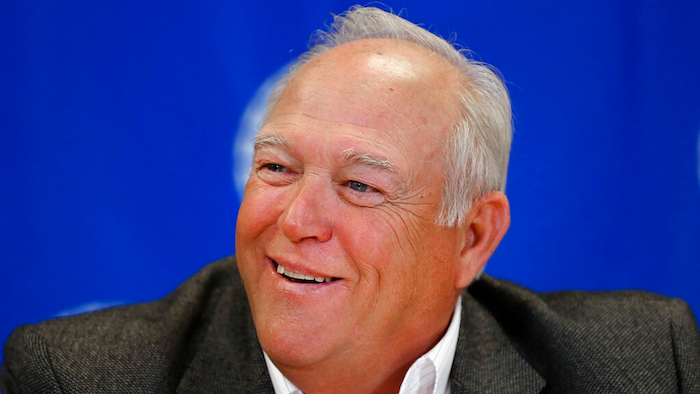 In a Thursday, Feb. 16, 2017 file photo, United Auto Workers president Dennis Williams speaks during a roundtable with reporters in Detroit. The United Auto Workers says it has accepted an offer on a lakefront house in northern Michigan, three months after federal prosecutors warned that it could be confiscated as part of a corruption investigation. Cabin 4 at a union conference center on Black Lake was being built for former union President Dennis Williams, who retired in 2018.
AP Photo/Paul Sancya, File

DETROIT (AP) — The United Auto Workers said it has accepted an offer on a lakefront house in northern Michigan, three months after federal prosecutors warned that it could be confiscated as part of a corruption investigation.

Cabin 4 at a UAW conference center on Black Lake was being built for former union President Dennis Williams, who retired in 2018. The home’s design plan included granite counters, stainless-steel appliances, a fireplace, wine cooler and a hidden storage room.

While the property was listed at $1.3 million, the U.S. Attorney's Office in March filed an affidavit in Cheboygan County, warning that the government had facts that could terminate an interest in the property.

Property traced to law violations is “subject to forfeiture to the United States," the affidavit states without disclosing any other details.

“It is common for the government to file one on any property they believe may be involved in a crime,” explained Jorin Rubin, a Detroit-area lawyer who specializes in forfeiture law.

UAW spokesman Brian Rothenberg said the buyer has no affiliation with the UAW. He didn't disclose a price.

Gina Balaya, a spokeswoman for the U.S. Attorney's Office, said the affidavit on the property will be removed “at the appropriate time.” She said the deal requires some local and state approval because of lake access and land division.

"We have absolutely no reason to believe the government is interested in blocking the sale, and we have been working cooperatively with the government to finalize the sale,” Rothenberg said.

The government's corruption probe has greatly embarrassed the UAW. Ten union officials and a late official’s spouse have pleaded guilty since 2017, including Gary Jones, who succeeded Williams as president and served for roughly 18 months.

Some officials used union dues for golf, lodging and fancy meals, while others tapped cash from a Fiat Chrysler-UAW training center with approval from an FCA executive. Still others took kickbacks from union contractors.

Williams has not been charged but his California home was searched last summer.

“This is the right thing to do,” UAW President Rory Gamble said of the sale. “We committed to this as part of our comprehensive reforms, and I believe the government agrees that the sale of Cabin 4 should go forward to an independent buyer and the proceeds from the sale should go back to what our membership intended it be used for to begin with."