Hundreds Of Union Members Picket In Strike At Kohler Co.

Hundreds of union members and their supporters picketed at the gates of the Kohler Co. on Monday in the first strike at the Wisconsin manufacturer in more than 30 years. 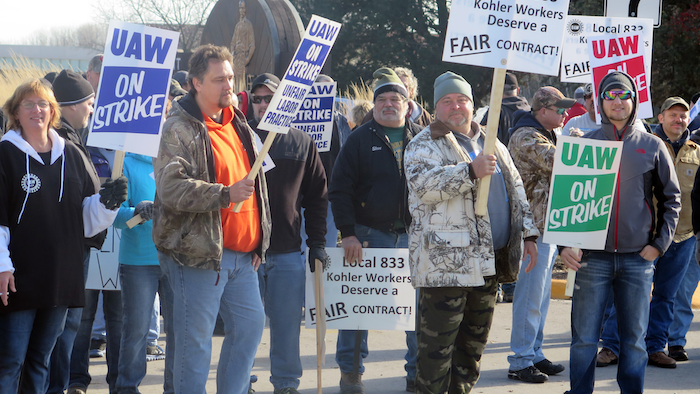 KOHLER, Wis. (AP) — Hundreds of union members and their supporters picketed at the gates of the Kohler Co. on Monday in the first strike at the Wisconsin manufacturer in more than 30 years.

Workers waved signs, cheered at honking cars and in one location clogged an intersection, which at one point backed up traffic for more than a mile on a two-lane country road into town.

"We're sorry it had to come to this, but we're standing for what we believe in," said John Matenaer, who said he has been with the company 30 years.

Workers want higher pay, lower health care costs and an end to a two-tier wage scale that they say unfairly limits many employees with less seniority to about $13 an hour regardless of the type of work they do.

"We're all one, all united," said Bob Durfee, who said he has 24 years with Kohler. "We should all have the same pay, pretty much across the board."

Kohler — which makes kitchen and bath fixtures, small engines and generators, and runs golf and resort destinations — released a statement on its website, saying the company was "very disappointed that our final offer was not accepted by our associates and is concerned that Union officials may have misrepresented what could be achieved in a strike."

Kohler had called for three raises of 50 cents an hour each year — about 2 percent a year — for most of its workforce. The offer raised health care costs but included a $1,200 bonus that the company said could cover the increase.

Workers, however, say they haven't had a raise since 2009 and that the proposed pay increases would actually amount to about 8 cents an hour by the end of the three-year contract.

"It's a billion-dollar company haggling over pennies," said Joel Mork, who said he has worked for Kohler for 15 years.

Union employees say those in the lower tier wouldn't earn a living wage or have a legitimate opportunity for advancement, despite working side by side with workers who make significantly more.

Dave Ertel, a bargaining committee member who said he has been with the company 24 years, said union members have been preparing for months for the eventuality of a drawn-out strike.

"We knew this was the way it was going to go," he said.

The company employs 32,000 people worldwide and has annual revenue approaching $6 billion, according to its website.

Dean Zettler, who has been with the company 22 years, said they will be out there "until it's done."

Yes, but with some exceptions.
Dec 23rd, 2020
Follow Us
Most Recent