More Americans applied for unemployment benefits last week, but levels remain near historic lows as employers are hesitant to let go of workers. 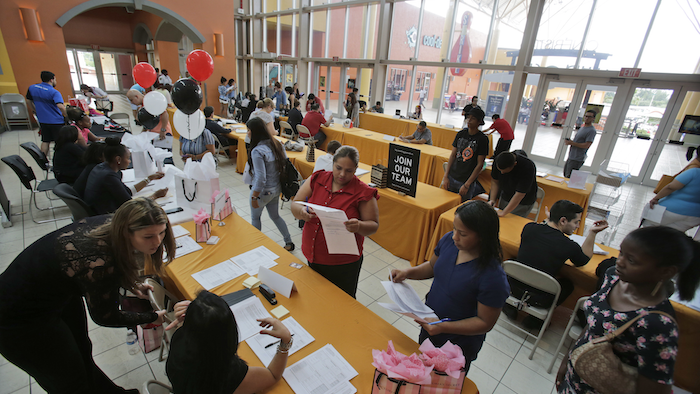 Jobless claims are a proxy for layoffs. Recent multi-decade lows indicate that employers expect the economy to continue to improve despite global pressures on growth, prompting them to hold onto workers. The four-week average has stayed below 300,000 since late March, achieving levels traditionally linked with a healthy job market.

The government releases the October jobs report Friday. Economists surveyed by FactSet expect that employers added a net 182,000 jobs last month. This would follow a sharp slowdown in hiring in September and August when hiring averaged just 139,000 jobs, a sharp slowdown from gains earlier in the year that routinely exceeded 200,000.

The strong dollar and weak economic growth abroad have weighed on the U.S. economy since August. U.S. factory output has also dropped because lower energy costs have led oil and gas drilling companies to reduce their spending on machinery and equipment.

As a result, the economy grew at a tepid annual rate of just 1.5 percent over the summer, the Commerce Department said last week, down from a much healthier pace of 3.9 percent in the April-June period.

But the slowdown in growth and hiring has yet to correspond with an increase in lay-offs, a sign that employers expect the economy to strengthen in the coming months.