Hiring in the United States rebounded in April as employers added a brisk 211,000 jobs, a reassuring sign that the economy's slump in the first three months of the year will likely prove temporary. 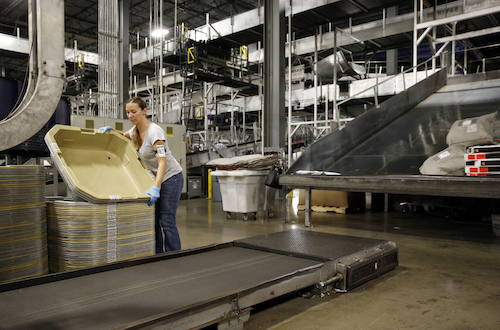 WASHINGTON — Hiring in the United States rebounded in April as employers added a brisk 211,000 jobs, a reassuring sign that the economy's slump in the first three months of the year will likely prove temporary.

The unemployment rate dipped to 4.4 percent — its lowest point in a decade — from 4.5 percent in March, the Labor Department said Friday .

The figures suggest that businesses expect consumer demand to rebound after a lackluster first quarter, when Americans increased spending at the slowest pace in seven years, and will need more employees.

So far this year, employers have added an average of 185,000 jobs a month, matching last year's solid pace. It shows that so far the job market under President Donald Trump closely resembles the one Barack Obama presided over in 2016.

Average paychecks did grow more slowly in April, increasing 2.5 percent over the past 12 months, below March's year-over-year gain. It means companies may not yet feel much pressure to raise pay to find or keep the workers they need. Typically, employers feel compelled to pay more as the number of unemployed dwindles. In a strong economy, hourly pay gains tend to average around 3.5 percent.

In an encouraging trend, the number of part-time workers who would prefer full-time jobs fell in April to the lowest level in nine years. This is a sign that many employers are meeting rising demand by shifting more part-timers to full-time work — even if they aren't raising hourly pay significantly.

And in fact, hiring was strongest last month in lower-paying industries. One such category that includes hotels, restaurants, casinos and amusement parks added 55,000 jobs, the most of any major sector.

Construction added just 5,000 jobs, after much larger gains earlier this year. Factories hired 6,000, the fewest for that category in five months.

The report adds to evidence that economic growth is rebounding in the current April-June quarter, with some economists forecasting that it could top a 3 percent annual rate, compared with the first quarter's 0.7 percent rate. Last quarter, consumers spent less in part because of low utility bills during an unseasonably warm winter. That's likely to prove a temporary restraint.

And the housing market is reaching new heights as home sales and construction march upward even though a limited number of properties are for sale. Sales of existing homes jumped in March to their highest level in more than a decade.

The retail industry's woes continued last month, with stores adding just 6,000 jobs. That's below their long-run average and comes after retailers slashed a combined 55,000 jobs in February and March.

Traditional chains like Sears and Macy's have been shedding jobs in the face of ferocious competition from Amazon.com and other e-commerce companies. Many traditional retailers are rapidly building up their own online storefronts and expanding their warehousing and logistics divisions. But those functions are less labor-intensive and are unlikely to fully offset the job losses at physical stores.

Factories have mostly recovered over the past six months from nearly two years of struggle. Plummeting oil prices had caused drilling firms to slash orders for steel pipe, machinery and other equipment. And weak growth overseas, plus a strong dollar, depressed exports. But oil and gas prices stabilized last fall. Growth is picking up in Europe and Japan and has stabilized in China. All that has helped lift factory output.