New York Manufacturers Grow At A Slower Pace In April

Manufacturing in New York state expanded more slowly this month than it did in March, but factory hiring looked strong. 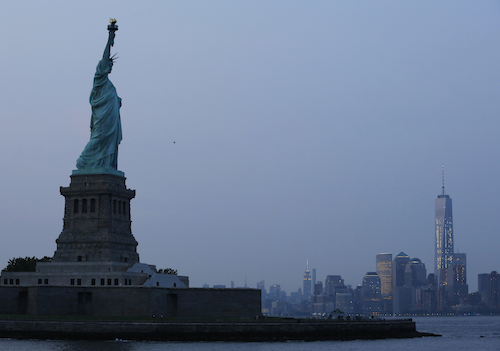 In this Tuesday, July 7, 2015, file photo, the Statue of Liberty stands in New York harbor with the New York City skyline in the background. On Tuesday, March 15, 2016, the Federal Reserve of New York releases its March survey of manufacturers. (AP Photo/Kathy Willens, File)

WASHINGTON — Manufacturing in New York state expanded more slowly this month than it did in March, but factory hiring looked strong.

The Federal Reserve Bank of New York said Monday that its Empire State Manufacturing Survey fell to 5.2 in April from 16.4 in March and a two-year high 18.7 in February. Still, anything above zero signals growth, and New York factories have been expanding for six straight months.

New orders grew at a slower pace this month. The index that measures hiring climbed to the highest level in more than two years. The Labor Department reported earlier that factories nationwide added 49,000 jobs from January through March; during the first three months of 2016, they had cut 4,000 jobs.

U.S. factories were hurt in late 2015 and early 2016 by cutbacks in the energy industry, weak economic growth around the world and a strong dollar that made American products more expensive in foreign markets. Global growth has improved this year, and the dollar has dropped since it peaked against the currencies of major U.S. trading partners at the end of 2016.