U.S. companies ramped up hiring in January, adding the most new workers since June, according to a private survey. 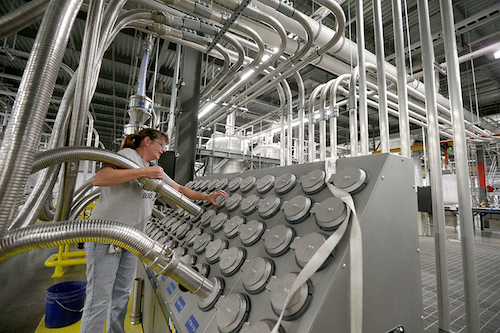 Susan Stacy moves a tube to sort recycled plastic bottle chips being processed at the Repreve Bottle Processing Center, part of the Unifi textile company in Yadkinville, N.C., Friday, Oct. 21, 2016. America has lost more than 7 million factory jobs since manufacturing employment peaked in 1979. Yet American factory production, minus raw materials and some other costs, more than doubled over the same span to $1.91 trillion last year, according to the Commerce Department, which uses 2009 dollars to adjust for inflation. That’s a notch below the record set on the eve of the Great Recession in 2007. And it makes U.S. manufacturers No. 2 in the world behind China. (AP Photo/Chuck Burton)

WASHINGTON — U.S. companies ramped up hiring in January, adding the most new workers since June, according to a private survey.

Payroll provider ADP said Wednesday that businesses added 246,000 jobs last month, up from 151,000 in December. The hiring was widespread, with the construction, manufacturing, health care and shipping industries all adding jobs at a solid pace.

The figures suggest that job gains have accelerated in the wake of the election. With the unemployment rate already low, at 4.7 percent, employers may be forced to offer higher pay to attract workers, which may create broader income growth.

The ADP data cover only private businesses and often diverge from official figures. Economists forecast that the government's jobs report, due Friday, will show a gain of 175,000, according to data provider FactSet.