A Stronger Global Economy Is Helping Boost The US Job Market

The U.S. job market is benefiting from an unlikely source: other countries. 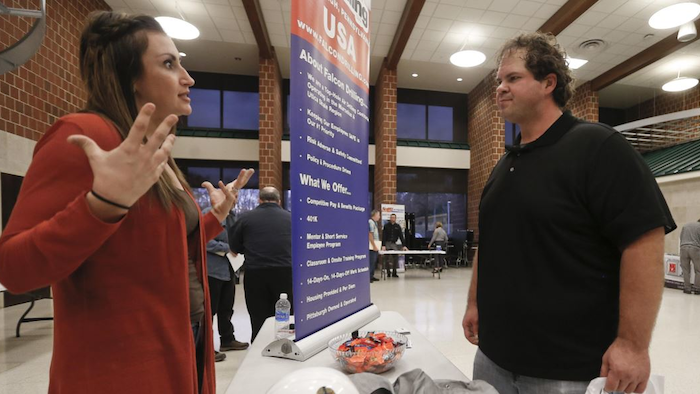 The U.S. job market is benefiting from an unlikely source: Other countries.

The global economy is showing renewed strength, with Europe, Japan and many developing nations growing in tandem for the first time in a decade. The brightening international picture is encouraging more hiring in the United States — even among manufacturers, which have been hurt in the past by global competition.

"We're seeing demand coming from where we haven't seen it in a long, long time," said Scott Anderson, chief economist at Bank of the West. "We're riding the wave of that added global growth."

In November, U.S. employers added a substantial 228,000 jobs, the Labor Department said Friday. It was the 86th straight month of gains, the longest on record, and a sign of the job market's enduring strength in the economy's ninth year of expansion. The unemployment rate held at 4.1 percent, a 17-year low.

Friday's jobs report coincided with other signs that the U.S. economy remains on firm footing. In the past six months, economic growth has exceeded an annual rate of 3 percent, the first time that's happened since 2014. Consumer confidence has reached its highest level since 2000.

Europe's economy is poised to grow at the fastest pace in a decade, and its unemployment rate has reached its lowest level in nearly nine years. Japan's economy expanded in the fall for the seventh straight quarter, its longest period of growth since 2001. Such developing economies as China and India are growing steadily.

The overall global economy is expanding at its fastest pace in seven years, according to the Organization for Economic Co-Operation and Development, a Paris-based think tank. It should fare slightly better in 2018, the OECD says.

Stronger economies overseas have helped boost profits at U.S. multinational corporations, a key reason why the Standard & Poor's 500 stock index has climbed 18 percent this year. U.S. companies in the S&P index derive about half their revenue from abroad.

Exports contributed 0.43 percentage point to economic growth in the July-September quarter, the most in nearly four years. Factories are making more goods for overseas markets, including agricultural and mining equipment. Exports of aircraft engines are up 13 percent, overseas shipments of semiconductors up 8 percent.

"More than anything, a marked improvement in the global economy is what is driving a better US manufacturing picture," said Cliff Waldman, chief economist at MAPI Foundation, a manufacturing research group.

Still, solid hiring and a low unemployment rate have yet to accelerate wages, which rose 2.5 percent in November compared with a year earlier. The last time unemployment was this low, average wages were growing at a 4 percent annual rate.

The November jobs data make it a near-certainty that the Federal Reserve will raise short-term interest rates for the third time this year when it meets next week, economists said.

Transportation and warehousing companies, which are benefiting from the e-commerce boom, added 10,500.

Hiring has slowed slightly since last year, which is typical when unemployment falls to low levels. Employers have added an average of 174,000 a month this year, a bit below last year's monthly average of 187,000.

There are also welcome signs that the recovery is finally benefiting workers who were enjoying little benefit in earlier stages of the economic rebound, said Jed Kolko, chief economist at job listing website Indeed.

Workers with just a high school diploma are much more likely to have jobs than they were a year ago. And employees in some of the lower-paying industries are receiving the biggest pay gains: Average hourly pay has risen a healthy 3.8 percent for workers in a category that includes hotel and restaurant employees.

"In a tight labor market, employers may look to a wider set of candidates than they would when unemployment was higher," Kolko said.

Brian Ernest, who owns a small home renovation and contracting firm in Edgewater, Maryland, just hired a project manager to help him keep up with his fast-growing business. He advertises through the Thumbtack website and relies on word of mouth among Realtors.

When he has advertised jobs this year, he hasn't found many takers, given the low unemployment rate. Rather than raise base pay, he started providing profit-sharing.

"I offered what everybody is really looking for: Incentives to increase their salaries," he said. Some government measures of income growth don't always capture bonuses.

Though wages have yet to pick up, Ian Shepherdson, chief economist at Pantheon Macroeconomics, said he thinks a continued decline in unemployment will lead to higher pay. U.S. metro areas with unemployment rates of 3.5 percent or lower are reporting annual wage growth of roughly 4 percent, Shepherdson said in an email.