Mexico's Low Wages Are Under Fire At NAFTA Negotiations

Mexican business and labor leaders appear to be resistant to any attempt to tighten labor standards or ensure that Mexican wages rise. 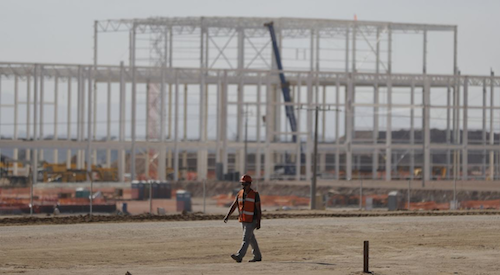 Mexico's low wages have become an increasing point of debate as the second round of negotiations on the North American Free Trade Agreement moved into their fourth day Monday.

Mexican and Canadian auto unions have said in a report that Mexican autoworkers earn about $3.95 an hour, which is about one-ninth of average wages north of the border.

Canadian auto workers leader Jerry Dias said over the weekend that wages in the three nations under NAFTA should be equalized. But a top Mexican union leader, Carlos Aceves del Olmo, has said equalizing wages is "a pipe dream," claiming wages in Mexico can't be compared to U.S. and Canadian salaries.

Gerardo Gutierrez Candiani, head of Mexico's special economic zones and the former leader of the country's business chamber, said Friday that Mexico could not be expected to go beyond its current labor laws and its constitution. They include vague references to the freedom of workers to unionize, but in practice pro-government unions often sign contracts behind workers' backs in Mexico.

On Sunday, the head of Mexico's agricultural council told local media that the U.S. should keep its nose out of Mexico's affairs.

"Let each country respect its labor issues, that's what Mexico is proposing," De la Vega said. "Mexico can't interfere in U.S. and Canadian labor issues, and we ask them same, that they don't get involved in this issue."

The talks are also focusing on such issues as rules-of-origin and local content, electronic commerce, the environment and anti-corruption measures.

Mexico's Economy Department said the five days of talks in 25 working groups are expected wrap up Tuesday. The first round of talks took place in Washington in mid-August, and several more rounds are expected.