Representatives of Nissan Motor Co. and the UAW said late Friday that 2,244 workers, or 62 percent, voted against the UAW. 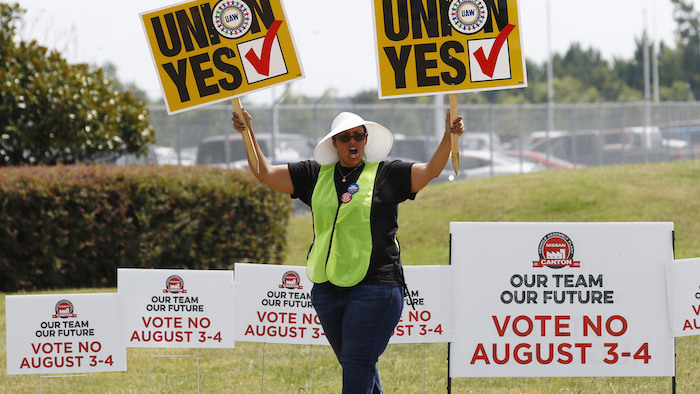 A UAW supporter sings as she tries to beat the hot sun outside an employee vehicle entrance at the Nissan vehicle assembly plant in Canton, Miss., Friday, Aug. 4, 2017. Union members set up informational lines outside employee entrances at the plant and greeted all shifts of workers arriving and leaving, reminding workers to vote for the union. The vote for union representation of line workers concludes Friday evening. (AP Photo/Rogelio V. Solis)

Workers at a Nissan assembly plant in Mississippi have voted against forming a union, adding to decades of futility by United Auto Workers organizers at foreign-owned auto plants in the American South.

Representatives of Nissan Motor Co. and the UAW said late Friday that 2,244 workers, or 62 percent, voted against the UAW, while 1,307, or 38 percent, favored the union.

"They have rejected the UAW and chosen to self-represent, continuing the direct relationship they enjoy with the company," she said in a statement. "Our expectation is that the UAW will respect and abide by their decision and cease their efforts to divide our Nissan family."

The UAW has never fully organized an international automaker in the traditionally anti-union South, although it did persuade some maintenance workers to join at a Volkswagen AG plant in Tennessee. The UAW's lack of influence among southern auto workers has reduced its bargaining power when Detroit automakers lose market share and close plants. After pouring resources into the organizing drive at Nissan, this loss could leave UAW leaders with tough decisions.

"The result of the election was a setback for these workers, the UAW and working Americans everywhere, but in no way should it be considered a defeat," UAW President Dennis Williams said in a statement.

Pro-union workers were defiant amid tears at a UAW office, with some calling for another election as soon possible. 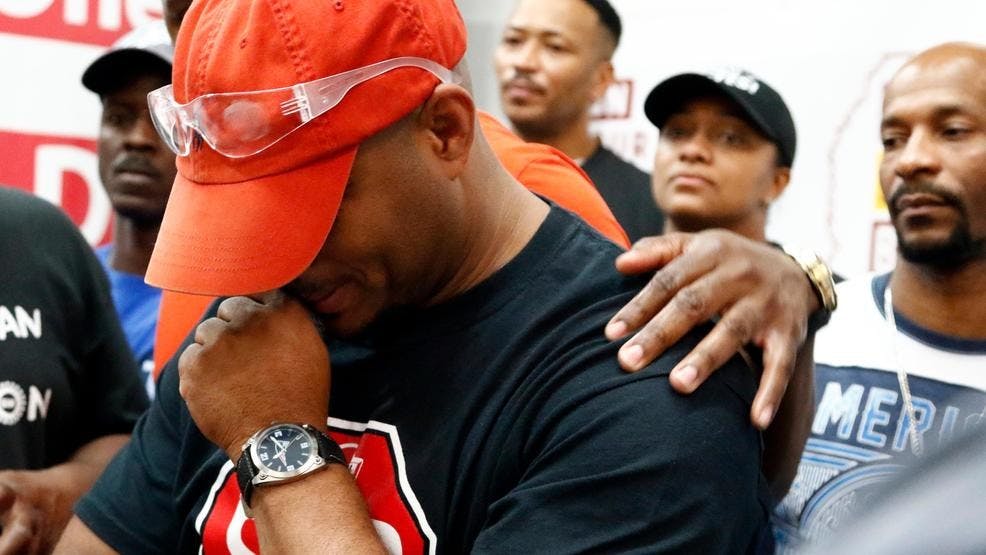 Nissan employee Morris Mock, is consoled as he and other pro-union Nissan employees express their disappointment at losing their bid to form a union at the Nissan vehicle assembly plant in Canton, Miss., Friday, Aug. 4, 2017. (AP Photo/Rogelio V. Solis)

"It hurts," said union supporter Phillip White. "We ran against a machine."

But some outspoken anti-union workers were celebrating, saying they had turned back an unwanted interloper.

The union filed seven new charges with the National Labor Relations Board just before polls closed Friday alleging that Nissan had broken federal labor laws during the campaign. If the labor board rules in favor of the charges, the board could order a fresh election. Among the claims: Nissan provided a faulty contact list to the union, it caused a contract worker to be filed because of his union support, and a manager told workers July 28 that they would lose benefits it they voted for a union.

UAW Secretary-Treasurer Gary Casteel had telegraphed the move Monday, when he alleged illegal activity by the company.

"Despite claiming for years to be neutral on the question of a union, Nissan waged one of the most illegal and unethical anti-union campaigns that I've seen in my lifetime," Casteel said in a statement Friday.

Nissan spokeswoman Parul Bajaj said the company lived up to its obligations in providing the list. She generally denied the other charges.

"The UAW is again launching baseless and unsubstantiated allegations against Nissan Canton in a desperate, last-minute attempt to undermine the integrity of the secret ballot voting process," Bajaj said in a statement.

The labor board has already issued a complaint against Nissan alleging other labor law violations that predate the election, but a judge has yet to rule on those. A decision on the new charges could be months or years away.

The union also could try to encourage a backlash against Nissan outside the United States, where it has tried to build pressure on the company through unions at other plants and supporters in the French government, which owns nearly 20 percent of the Renault Group, Nissan's business partner. The union said it would "educate" the French government about Nissan's anti-union campaign. 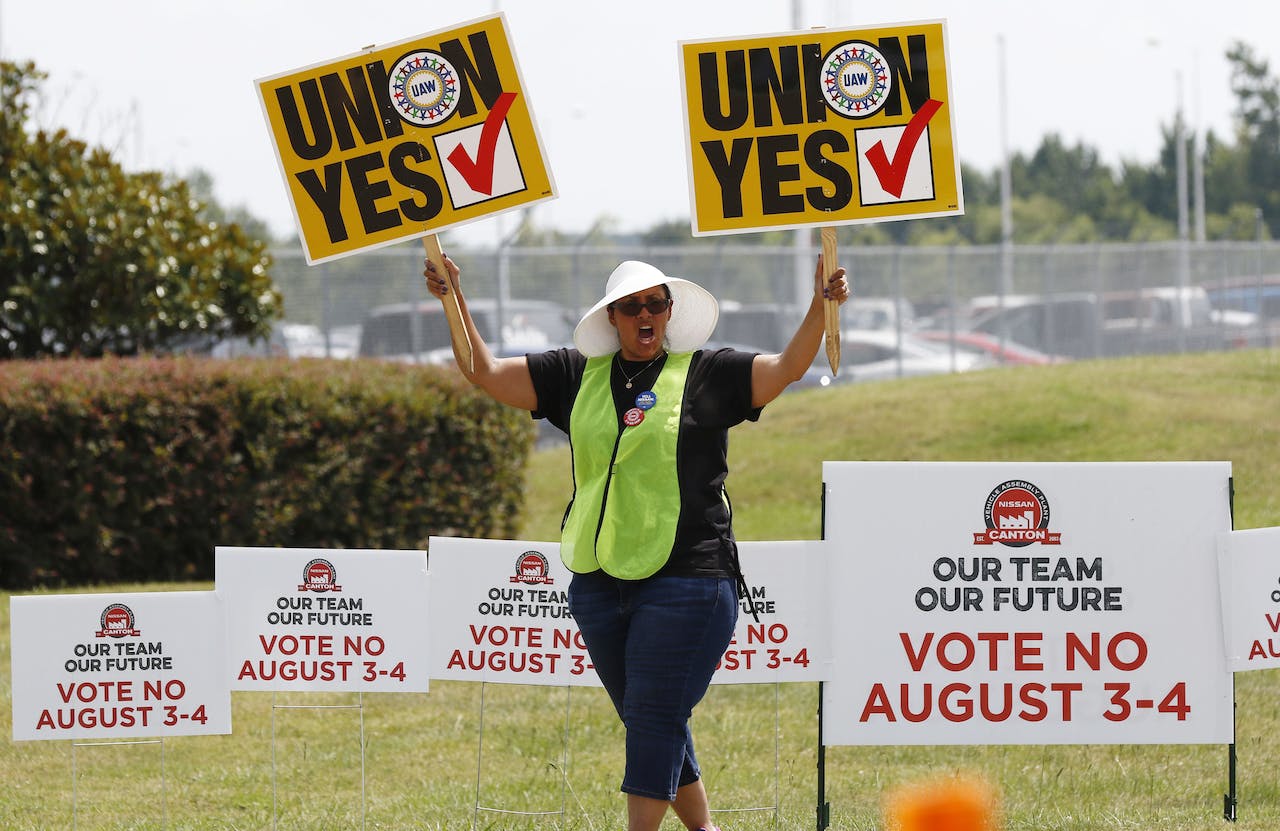 A UAW supporter sings as she tries to beat the hot sun outside an employee vehicle entrance at the Nissan vehicle assembly plant in Canton, Miss., Friday, Aug. 4, 2017. Union members set up informational lines outside employee entrances at the plant and greeted all shifts of workers arriving and leaving, reminding workers to vote for the union. The vote for union representation of line workers concludes Friday evening. (AP Photo/Rogelio V. Solis)

Nissan has sought to finesse its position against unions in the U.S. while defending its work with organized labor in the rest of the world. Carlos Ghosn, chairman of the Renault-Nissan Alliance, told French lawmakers last year that the alliance "has no tradition of not cooperating with unions."

Rodney Francis, the plant's human resources director, said the company has a right to make its case to workers that unionization would hurt management flexibility and make the plant less competitive economically. Republican Gov. Phil Bryant and anti-union workers blamed the UAW for layoffs and plant closings by Detroit's major automakers.

"With the UAW, all you've got to do is look at their history," said Tony Hobson, a Nissan forklift driver and outspoken union opponent.

For years, union organizers reached out to the majority African-American workforce at the Canton Vehicle Assembly Plant, arguing that workers' rights are civil rights. They pointed to reduced retirement and health benefits for longtime workers, and lower pay scales for 1,500 Nissan workers who began as contract laborers in recent years. White and other union supporters said after the vote they felt those newer employees, in particular, had been intimidated.

A 2015 study by the Center for Automotive Research found that Nissan paid an average of $44 an hour in pay and benefits, toward the low end of all automakers. Nissan has given pay raises since then.

Workers at Nissan's plant in Smyrna, Tennessee, voted against UAW representation in 1989 and 2001, but this was the first election at the Mississippi plant. The UAW also lost a 2014 vote among all workers at Volkswagen in 2014 before winning a second vote among 160 maintenance workers.

Both sides shifted into a frenetic and highly visibly campaign mode after pro-UAW workers filed petitions seeking a vote in early July.

Kristen Dziczek of the Center for Automotive Research said that although the UAW was the underdog, odds were unlikely to improve soon, as President Donald Trump's appointees take over the National Labor Relations Board. A corruption scandal involving union employees allegedly taking bribes from a former Fiat Chrysler executive also threatened to spread.

The UAW's failed campaign could leave scars. Pro-UAW worker Earnestine Meeks said a co-worker flashed a gun at her, demanding she leave his property during a home visit by union backers recently.

"Nissan will focus on bringing all employees back together as one team, building great vehicles and writing our next chapter in Mississippi," Bajaj said.