Mother Jones Monument To Be Restored

Dedicated six years after her death in 1930 at the age of 93, the 80-ton Minnesota granite obelisk honors the woman who was born Mary Harris Jones, the white-haired, 5-foot-tall former seamstress who was in the thick of some of the nation's most venomous labor disputes. 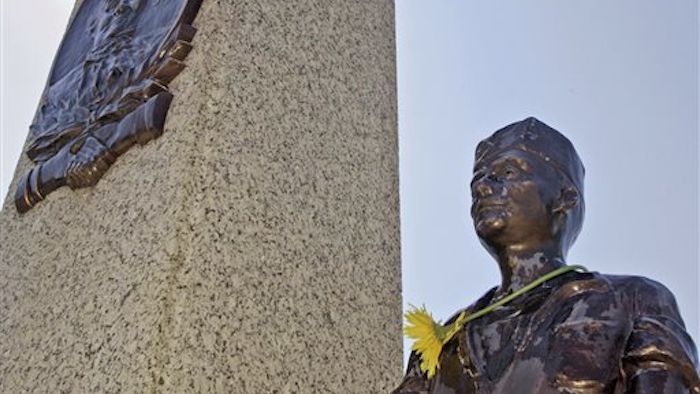 ST. LOUIS (AP) -- Union workers are chipping in to give a makeover to a monument for firebrand labor activist Mother Jones, more than 80 years after their predecessors and school kids scrimped pennies during the Great Depression to build the towering structure at her Illinois gravesite.

Local politicians joined labor leaders Tuesday in a union-owned Mount Olive cemetery northeast of St. Louis to announce that a drive led by the AFL-CIO cobbled together more than $60,000 for the cause. Donors, from more than 100 different union groups, come from 17 states, stretching from California to New York and contributing anything from $5 to $5,000.

"The legacy of Mother Jones is one we treasure," Michael Carrigan, the Illinois AFL-CIO's president said during a ceremony this week announcing the fund-raising results.

Dedicated six years after her death in 1930 at the age of 93, the 80-ton Minnesota granite obelisk honors the woman who was born Mary Harris Jones, the white-haired, 5-foot-tall former seamstress who was in the thick of some of the nation's most venomous labor disputes.

Many have likened her to Martin Luther King Jr., with her struggle for worker rights analogous to King's push for civil ones.

"I'm not a humanitarian. I'm a hell-raiser," she once proclaimed in her legendary profanity-peppered rhetoric.

Jones was in Washington in 1898 when more than a dozen men were killed in gunfire exchanged during a labor dispute at the mine in Virden near here. The deadly clash, touched off when replacement workers tried to pass through a group of armed strikers, became known as the "Virden Riot" — to unionists, the "Virden Massacre." More than 40 others were wounded.

Four of the dead miners were from Mount Olive, where they initially were buried in the town cemetery before that land owner objected to ceremonies and other activities miners held there.

The Lutheran cemetery barred the dead miners because the minister denounced them as "murderers," John Keiser wrote in 1969 for the Journal of the Illinois State Historical Society.

Jones later wrote she wanted to be buried near the miners she called "those brave boys."

She got her wish.

Jones' elaborate monument has a large medallion bearing her likeness, and it's flanked by bronze statues of two standing miners — one holding a pickax, the other a sledgehammer. A bronze plaque on the base, in part, warns, "Let no traitor breathe o'er my grave."

A simple stone in the ground marks Jones' plot, sandwiched between those of the dead from Virden and that of "General" Alexander Bradley, a self-appointed United Mine Workers of America organizer around the turn of the 20th century.

Two other bronze plaques list the names of Illinois miners who between 1932 and 1936 gave "their lives to the cause of clean unionism in America."

The cemetery and its monument were declared a national historic site in 1972. As part of the renovation, the statues will be cleaned and plagues upgraded. A local bricklayers' union will donate $15,000 worth of labor to rework the graveyard's entrance, and plans are afoot to create a local Mother Jones museum.

"While she was hated by corporations, she was loved by the workers who turned to her for justice in the workplace," Carrigan said.