What became known as the Ludlow Massacre quickly evolved into a national rallying cry for labor unions and eventually helped lead to New Deal labor reforms. But over the years, the tragedy has been largely forgotten, even among many in Colorado. 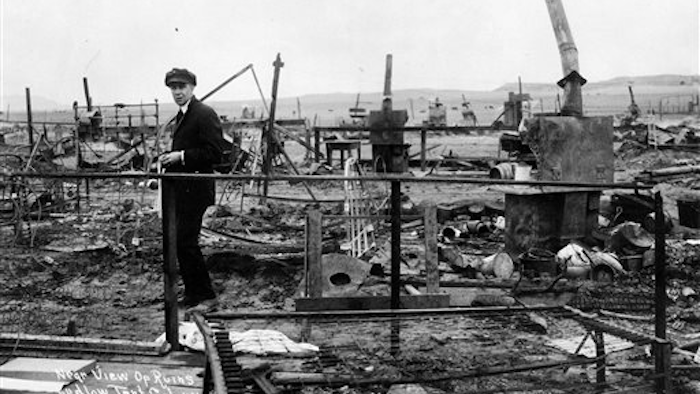 DENVER (AP) -- A century ago this Sunday, 11 children and two women died in a fire that followed a shootout between the Colorado National Guard and striking coal miners at a tent camp in

What became known as the Ludlow Massacre quickly evolved into a national rallying cry for labor unions and eventually helped lead to New Deal labor reforms. But over the years, the tragedy has been largely forgotten, even among many in Colorado.

To mark the centennial, a Greek Orthodox Easter service will be held Sunday on the prairie where the women and children died on April 20, 1914. They had hidden in a dugout beneath the tent colony when the fire roared through the camp. The miners came from many countries; mining rules were posted in 27 languages. But most had joined fellow Greek strikers in celebrating Orthodox Easter the day before.

The United Mine Workers of America plans a May memorial at the site about three hours south of Denver with descendants of labor activist Mother Jones, who was jailed twice for refusing to stay away from the strike zone.

The deaths at Ludlow came during a strike launched in September 1913 by miners whose living conditions were largely controlled by Colorado Fuel & Iron, owned by John D. Rockefeller Jr.

They lived in company towns, sometimes surrounded by barbed wire. They had to shop in company stores and be treated by company doctors. They wanted the right to form a union, have 8-hour days and be paid for work to make mines safer and not just for the coal they extracted.

Strikers also wanted enforcement of Colorado's mining laws. Colorado had one of the worst mining death rates in the country but only two mine inspectors. About 3,000 workers were killed between 1880 and 1910 mining the coal that fed railroads and heated people's homes.

No one knows who fired the first shot at Ludlow, where eight people— five strikers and one of their sons, a soldier and a bystander — were killed in addition to the 13 who died in the fire.

The battle ignited 10 days of fighting in southern Colorado. Miners, including veterans of European wars, killed 30 mine guards, supervisors and strikebreakers. They surrendered after President Woodrow Wilson sent federal troops to the state.

In Colorado, strikers returned to work without achieving their demands. Rockefeller introduced a company union and grievance procedure. Miners only won the right to unionize on their own with the National Labor Relations Act of 1935.

A hundred years on, U.S. coal mining is still dangerous work. Twenty-nine miners were killed in the Upper Big Branch mine explosion in West Virginia in 2010. The Mine Safety and Health Administration reported 20 coal mining deaths both in 2013 and in 2012.

What was called the "labor question" seemed as intractable then as Middle East conflict today, said Nelson Lichtenstein, a history professor and director of the Center for the Study of Work, Labor and Democracy at the University of California, Santa Barbara.

Ludlow's U.S. legacy has diminished over the years as unions have weakened, Lichtenstein said. Only about a tenth of U.S. workers are now represented by organized labor. Lichtenstein and Convery say they see parallels between southern Colorado's labor war of a century ago and the plight of people working in garment factories in the developing world today.

"We have outsourced our inequity," Convery said.

Fawn-Amber Montoya, an associate professor at Colorado State University-Pueblo who has helped organize the centennial events, said Ludlow still has a lesson to teach about dialogue and how to treat low-wage workers, including immigrants.

"We do have these moments where we engage in conflict because there isn't dialogue going on," Montoya said.