The proposed changes are in line with President Barack Obama's vows to make it tougher for U.S. companies to replace American workers with cheaper labor abroad, either by opening factories overseas or subcontracting their work to outsourcing companies. 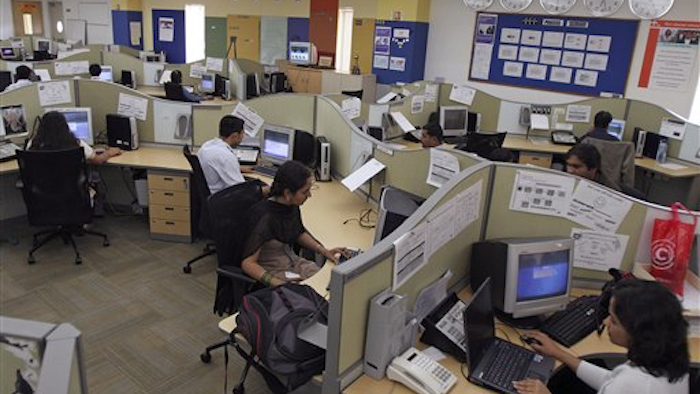 MUMBAI, India (AP) -- Low cost efficiency put India's outsourcing companies at the heart of global business and created a multibillion dollar industry that for years has skated over criticism it was eliminating white collar jobs in rich nations. Now, the industry's long-held fears of a backlash are being realized in its crucial U.S. market.

Provisions in an overhaul of U.S. immigration law will close loopholes that allow outsourcing companies, Indian and American, to pay guest workers in the U.S. at rates often below wages for equivalently skilled Americans. The proposed changes are in line with President Barack Obama's vows to make it tougher for U.S. companies to replace American workers with cheaper labor abroad, either by opening factories overseas or subcontracting their work to outsourcing companies.

The cost to the Indian companies, which do everything from running call centers to managing the massive amounts of transactional data generated by banks, could run to several hundred million dollars in lost profits.

India's $108 billion outsourcing industry has shrugged off bad publicity in the U.S. and other countries since it began blossoming more than a decade ago. It has plenty of supporters among global corporations who prized outsourcing's ability to lower their costs and boost profits. But with the world economy stagnating, and U.S. unemployment at stubbornly high levels since the recession, a day of reckoning appears to be looming.

At issue in the U.S. are high-skill worker visas called H-1B that have been dubbed the "outsourcing visa" by critics who say the system allows companies to bring in cheaper tech workers from abroad instead of hiring Americans.

The immigration bill, the larger point of which is to boost border security and provide a path to citizenship for 11 million people living illegally in the U.S., would impose steep fees for companies such as Indian outsourcers that have more than half their U.S. staff on the permits and also require them to pay higher salaries.

The Indian government and the country's outsourcing industry are gearing up for a fight during debate on the bill, which could take weeks or months due to its other contentious issues. The draft law is now in hearings before the Senate Judiciary Committee.

Yet criticism in India that the proposed changes are protectionist and discriminatory is not eliciting sympathy in the U.S.

"This has to do with a business model that exploits U.S. immigration loopholes for competitive advantage," said Ron Hira, an associate professor of public policy at Rochester Institute of Technology who studies outsourcing. "It has nothing to do with the location of the headquarters of the company."

The rapid rise of India's information technology outsourcing industry has been a success story in a country better known for its stifling bureaucracy and biting poverty. In under a decade, outsourcing companies had created more than 2 million jobs and in 2012 contributed 6.4 percent of India's GDP, according to the National Association of Software and Services Companies, based in New Delhi.

That success has reflected the ability of India's companies to develop cheap software using Indian designers at home, where wages are far lower than in the U.S. But that makes it necessary, the industry says, to bring the Indian designers and experts "on site" to the U.S. where they are putting the systems into place.

Indian outsourcing companies now use more than one-third of the 65,000 high skill visas allowed under U.S. regulations. The U.S. branches of Indian outsourcers rely on bringing in their own tech experts from home, saying they are most familiar with the software and other technology developed in India to streamline American companies' payrolls, record-keeping and other outsourced functions.

While American companies also compete to obtain the foreign guest worker visas, most are not as dependent on the visas as Indian companies, industry representatives said. Still, it was an American company, New Jersey-based Cognizant Technology Solutions, which was the No. 1 user of the guest worker visas, with nearly 9,300 in 2012. Cognizant also has a significant workforce in India.

"Lack of talent in the United States and the abundance of talent in countries such as India" is the reason for high demand for foreign tech worker visas, said Ameet Nisarkar, senior vice president of NASSCOM.

He said unemployment in the U.S. tech industry has been at 4 percent or below, even during the worst days of the global recession, and so high tech companies need to bring in foreign talent.

The proposed new visa regulations — hammered out in negotiations among the eight U.S. senators who drafted the bill — would raise the H-1B cap from 65,000 to 110,000 initially to satisfy technology companies who argue they need the foreign workers.

However, seeking to prevent undercutting American salaries, the bill would require those foreign workers to be paid more than under current law, impose steep fees of $10,000 per visa on big companies with more than half of their staff under such visas and starting in 2014 completely ban new H-1B visas for large firms with more than 75 percent of staff as guest workers.

For U.S. labor advocates, those profits are proof that Indian outsourcing companies can afford to pay for what they say is damage done to the U.S. labor market.

"Indian companies can advertise and recruit in the U.S. just the way foreign auto companies do. There is plenty of homegrown talent who would be happy to work at a good salary for a company with a future in the United States," said Ross Eisenbrey, vice president of the Economic Policy Institute, a left-leaning think tank in Washington.

For the past 60 years, state law exempted farmworkers from overtime pay.
Nov 6th, 2020

The economy and has regained barely half the 22 million jobs that were lost to the pandemic in early spring.
Nov 5th, 2020

US Productivity Increases 4.9% in Third Quarter

The pace slowed from the previous quarter but remained higher than much of the past decade.
Nov 5th, 2020

A report says the Thailand-based supplier was using chained monkeys as part of their operation.
Nov 4th, 2020
Follow Us
Most Recent