The U.S. Equal Employment Opportunity Commission is suing Henry's Turkey Service, of Goldthwaite, Texas, on behalf of 32 former workers whom it housed and oversaw while they worked at West Liberty Foods in West Liberty, Iowa. The commission is expected to seek unspecified compensatory and punitive damages. 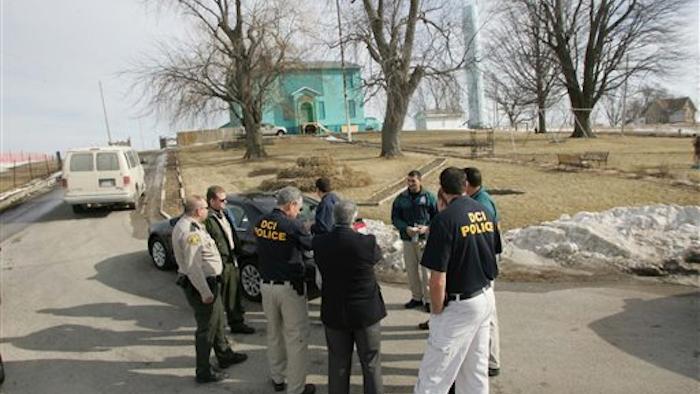 IOWA CITY, Iowa (AP) -- A now-defunct Texas company that put mentally disabled men to work at an Iowa turkey plant for decades is due in court to defend itself against allegations that it subjected the men to physical and verbal abuse.

The U.S. Equal Employment Opportunity Commission is suing Henry's Turkey Service, of Goldthwaite, Texas, on behalf of 32 former workers whom it housed and oversaw while they worked at West Liberty Foods in West Liberty, Iowa. The commission is expected to seek unspecified compensatory and punitive damages against Henry's for allegedly subjecting the men to abuse that "created an atmosphere of fear and intimidation," court filings show.

The men, long known locally as "the boys," worked at the plant from the 1970s until 2009, when Iowa officials placed them in the state's care and shut down the bunkhouse where they lived after finding unsafe conditions.

The action triggered numerous state and federal investigations, which found the men were severely underpaid. For three decades, each was paid $65 per month — or roughly 41 cents per hour — for their work processing slaughtered turkeys. There were no raises.

U.S. District Judge Charles Wolle has already ordered Henry's to pay $1.37 million in back pay in the case, saying Henry's deducted too much from their checks to cover living expenses.

At the trial Tuesday in Davenport's federal courthouse, the commission is expected to argue that the men faced "discriminatory terms and conditions of employment" in violation of the Americans with Disabilities Act. EEOC attorney Robert Canino declined to comment, but outlined out some of his case in court filings.

The trial is expected to feature testimony about how the men faced shoddy living conditions at an old, converted former schoolhouse, where investigators found substandard construction and other unsafe features, a leaky roof and insect infestation.

The commission is expected to argue that the men faced unnecessarily harsh discipline, including being forced to stay in the company's van or their rooms and having their televisions and sound systems confiscated. Henry's operators also didn't provide the men with adequate medical care, they expected the men to work regardless of illnesses and injuries, and they sometimes denied the men bathroom breaks, the commission alleges.

The company's attorney, David Scieszinski, did not respond to a message seeking comment.

Henry's was started by Texas rancher T.H. Johnson, with the government's backing, as a way to employ men with disabilities rather than having them live in taxpayer-funded institutions, said Johnson's daughter, Mina Kay Martin of Burnet, Tex. She said her family treated the boys as their own, and recalled how her father lived for years with the men at the Iowa bunkhouse in Atalissa, which is seven miles from the plant.

After her father's death in 2007, she said the company was in the process of winding down the operation and moving the men into nursing homes for retirement. Martin said she was horrified when she discovered conditions at the bunkhouse had become filthy and heard that some of them had been mistreated by Dru and Randy Neubauer, a West Liberty couple who supervised them for Henry's.

"I know it went bad there at the very end," she said. "It was never, ever our intention for anything bad to happen to those boys, ever. We did it for too many years. It was just a labor of love for all of us."

Martin said she expects to receive a warm welcome from "the boys" in the courtroom. She said she plans to give the Neubauers "a piece of my mind because of the abuse."

The EEOC allegations focus on conditions between 2007 and 2009, when the Neubauers supervised the men.

A phone number for the Neubauers was disconnected.

The Iowa Attorney General's Office has declined to charge anyone in the case, saying that the civil penalties sought by regulators were enough to hold company officials accountable.

Dan Waters, who is West Liberty Foods' general counsel, said the company was aware of one incident in which Randy Neubauer physically abused an employee at the plant. West Liberty Foods is cooperating with the EEOC and has agreed to testify about that incident, which resulted in Neubauer being banned from the plant, he said.

Kraft Foods started contracting with Henry's to provide the workers in the 1970s, and West Liberty Foods continued the arrangement after purchasing the plant in 1996, even though it cost the company more than hiring its own employees, Waters said. Henry's received compensation based on how many turkeys were processed, and its contract was worth more than $500,000 by 2008.

"They were good workers. We continued this because we thought it was a worthwhile program," Waters said. "We weren't aware of problems they may have been having off-site with Henry's Turkey Service until after the government intervened."

Henry's has argued that West Liberty Foods was a joint employer, but Wolle has rejected that claim. Waters said Henry's was responsible for the men's payroll and supervision, and West Liberty Foods thought they were receiving a fair wage.

Henry's improperly deducted $1,000 from their monthly paychecks — and hundreds more from disability payments — to cover their room and board, transportation and other expenses, the EEOC has alleged. The company rented the bunkhouse from the city of Atalissa for $600 per month.

Even though the men had been for decades, the law limits their recovery to the two-year period before the violations were reported. Henry's agreed to change its wage practices in 2003 following a federal investigation, but it never did so, Wolle ruled.

These kids are more likely to dislike school and have trouble paying attention in class.
Jul 28th, 2020
Follow Us
Most Recent