Dubai Dreams Of Flying Taxis Darting Among Its Skyscrapers

With a whirling buzz from 18 rotors, the pilotless helicopter gently lifted off the ground and soared up into the afternoon sky, the spire of the world's tallest building visible behind it. 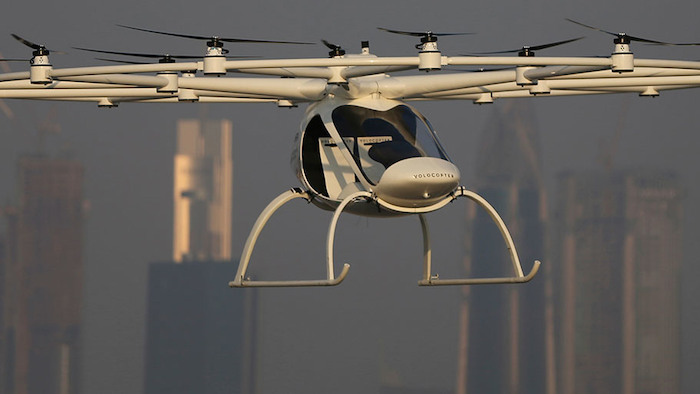 DUBAI, United Arab Emirates (AP) — With a whirling buzz from 18 rotors, the pilotless helicopter gently lifted off the ground and soared up into the afternoon sky, the spire of the world's tallest building visible behind it.

The recent unmanned flight by the German-made electric Volocopter represents the latest step in Dubai's pursuit of flying taxis, which would not seem out of place among the Gulf city's already futuristic skyline — imagine "Blade Runner," with less rain.

Dubai already has invested in another model of a flying, autonomous taxi, and is working to design regulations for their use. Putting more passengers in the air could free its already clogged highways and burnish the city's cutting-edge image of itself.

"It's public transportation for everybody, so you can use, you can order it, you can pay for the trip and the trip is not much more expensive than with a car," said Alexander Zosel, Volocopter's co-founder. "If you build roads, you build bridges, it's a huge amount and it's always much more cheaper to have a system where you don't need that infrastructure." 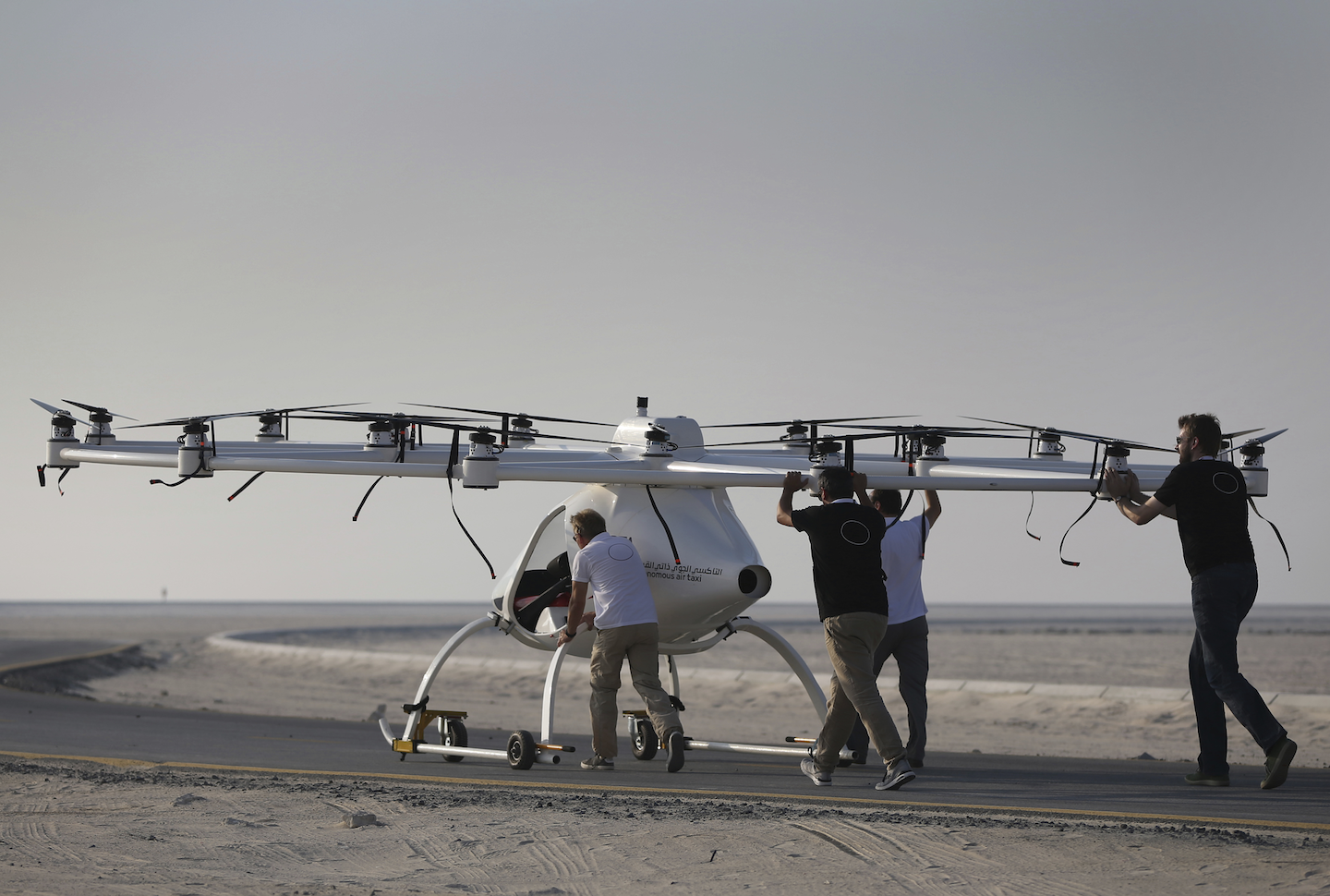 In this Sept. 26, 2017 photo, a Volocopter prototype is being pushed by their operators before it sets for a test fly in Dubai, United Arab Emirates, Tuesday, Sept. 26, 2017. Dubai is hoping to one day have flying, pilotless taxis darting among its skyscrapers. Just this week, the city-state in the United Arab Emirates hosted crews from the German company Volocopter, which had an electric, battery-powered two-seat prototype take off and land. Dubai hopes to have rules in place in the next five years to be ready for having the aircraft regularly flying through its skies. (AP Photo/Kamran Jebreili)

Driving in Dubai already makes one yearn for the open skies. Rush hour on Sheikh Zayed Road, a dozen-lane artery running down the length of the city, alternates between dense gridlock and sports-car slalom. Over 1.5 million Dubai-registered vehicles ply its roads, not counting those crowding in from the United Arab Emirates' six other sheikhdoms.

The Volocopter's designers envision the electric, battery-powered two-seat helicopters taking off and landing from pads set up across the city. The prototype used in Dubai has a maximum flying time of 30 minutes at 50 kph (31 mph), with a maximum airspeed of 100 kph (62 mph). Batteries charged in climate-controlled areas near the pads would be swapped in as needed.

"I believe (the) urban air taxi will contribute an interesting addition to the existing transportation modes," Volocopter CEO Florian Reuter said. "There are certain routes that are just extremely beneficial if you can go to the third dimension."

In practice, however, there's a long way to go. Convincing white-knuckled flyers to get into a buzzing, pilotless helicopter is just the beginning. Unpiloted passenger flights represent a new frontier for regulators. Dubai's Road and Transportation Authority, which has invested an undisclosed sum in Volocopter, says it will work the next five years to come up with laws and develop safety procedures.

That's a longer time frame than initially offered by Dubai. Mattar al-Tayer, the head of the RTA, told a conference in February that the Chinese-made EHang 184, a Volocopter competitor, would be regularly flying through the city's skies by July, though that deadline came and went. The RTA did not respond to a request for comment.

Still, Dubai remains at the front of the pack when it comes to embracing new technology.

Dubai's ruler, Sheikh Mohammed bin Rashid Al Maktoum, says he wants 25 percent of all passenger trips in the city to be done by driverless vehicles by 2030. The city has a deal in place with Los Angeles-based Hyperloop One to study the potential for building a hyperloop line between it and Abu Dhabi, the Emirati capital. That technology has levitating pods powered by electricity and magnetism hurtle through low-friction pipes at a top speed of 1,220 kph (760 mph).

For now, the Volocopter's brief flights in Dubai drew VIP crowds and film crews making advertisements. But its executives say after rules are in place, they will be ready for mass production. Already, Volocopter has drawn the interest of automobile manufacturer Daimler AG, which was part of a consortium that put up $30 million in capital for Volocopter. Even Airbus, a major airplane manufacturer, is looking at building its own flying taxis.

"We've proven that it works," Zosel said. "At the end of this five years, Dubai will be ready."

Artificial intelligence doesn't have a singular end goal — it covers so much ground and can touch every business decision if leveraged the right way.
May 18th, 2021
Follow Us
Most Recent