For nearly three decades Krishan Luthra stubbornly labored away in a General Electric research lab on a long-shot effort to cook up a new type of ceramic that few consumers will ever see or use. 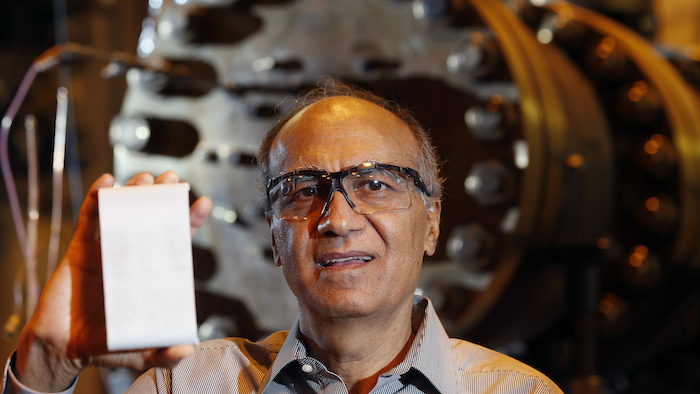 Niskayuna, New York — For nearly three decades Krishan Luthra stubbornly labored away in a General Electric research lab on a long-shot effort to cook up a new type of ceramic that few consumers will ever see or use.

Now this obscure material, which is lightweight, strong and can handle extreme temperatures, is being built into the bellies of jet engines and promises to save billions of gallons of fuel in the coming decades by reducing weight and allowing engines to run hotter.

It has helped GE win jet engine orders worth $100 billion — so far — from airlines looking to shave their huge fuel bills. In the future it is expected to be used in power plants and other equipment.

"It's a dream material," says Luthra, who has spent most of his career dreaming about it.

The material is a type of ceramic that is hard and can handle high heat, like the ceramics people have been making for 25,000 years. But this ceramic is a complex composite that is also very light, and tough like a metal. No one wants the aircraft engine that is holding them 35,000 feet above the earth to shatter like a vase.

Success came only at the end of a tortured path of fluctuating research funding and disappointments that at times shook Luthra's hopes.

"There were times where I wasn't sure it was going to work," Luthra admits. "But I guess I was too stubborn. I thought it was the right path."

GE is one of the few big companies that continue to operate large industrial labs that house thousands of scientists who work on basic research and long-shot projects that, sometimes, result in inventions like Luthra's.

The Department of Energy helped with some early funding, hoping the materials could be used in power plants. NASA wanted to use them in supersonic aircraft. The U.S. military hoped they could be used in a new fighter jet. None of the efforts fully panned out, but they helped advance the research far enough for GE's Aviation division to fund more research and development, and to finally commercialize it.

The metal "super-alloys" that now line the hottest parts of jet engines are heavy, about 70 percent as dense as lead. And engineers can't increase combustion temperatures because the alloys would melt. Already, today's engines employ elaborate cooling mechanisms that divert air for cooling that otherwise would be used to power the plane.

Ceramic matrix composites can withstand temperatures 20 percent higher than these metals, and they are one-third the weight.

"For what it does, nothing can compare to it," says Gregory Morscher, a ceramic composites expert and mechanical engineering professor at the University of Akron.

The theoretical qualities of these ceramic composites have long been well known, but Luthra wanted to make them a reality, and put them to use.

As early as 1994 Luthra had zeroed in on what he thought would be the basic chemistry and structure of the matrix — thin filaments coated with a ceramic that is shaped into a lattice. But it took years to find the perfect materials and the best way of putting them together.

One leap forward was a new type of fiber developed in Japan made of silicon carbide. But coating these fibers with a ceramic, each just one eighth the width of a human hair, evenly, was extremely difficult.

"If you don't do that right you get a ceramic that behaves like china, and if you do it right you get ceramic with metal properties, and that's the big deal," he says.

He figured how to apply the coatings to each individual fiber in something called a chemical vapor deposition reactor, but no one made these devices commercially so GE had to build three of its own.

The fibers are then bathed in a polymer that arranges them into a lattice-like structure. Then, like all ceramics, the material is baked. The polymer burns away and leaves behind a strong, light lattice that is later filled with liquid silicon to create a solid structure.

GE designed the material into an engine called the LEAP to be used on the coming Airbus 320neo and Boeing 737 MAX. GE is making the engine through a joint venture called CFM International. Pratt & Whitney, CFM's main competition, is trying to achieve similar fuel savings with a new type of jet engine that uses a gear system never tried before.

So far customers seem to be opting for the simpler, lighter LEAP. It is winning about 75 percent of the market for planes that size, and CFM has taken orders for 8,000 of them worth $100 billion. The first test flight is expected to take off in the next several weeks.

"It's allowing us to do things we'd never have been able to do," says Gareth Richards, who manages the LEAP program for GE's Aviation division, of the composite.

GE says that by 2020, as more components are made with this material, engine thrust could be increased by 25 percent and fuel consumption could improve by 10 percent — extraordinary gains for a technology that counts a single percentage point of improvement as a huge advance. It will also almost certainly be used in gas-fired power plants and perhaps in nuclear reactors as well.

Luthra still doesn't feel like his job is done, though. He wants to improve the composites so they can handle even higher temperatures, and he wants to convince more divisions at GE to use the materials.