The manufacturer is voluntarily analyzing 38 similar spools that are about the same age but are out of service awaiting maintenance and repairs. Other inspections of working engines are expected. 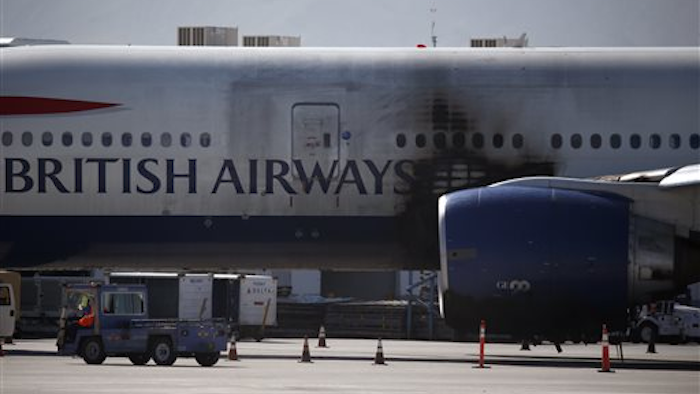 LAS VEGAS (AP) — The company that made an engine that caught fire as a British Airways plane was taking off from Las Vegas is inspecting other engine parts as part of a federal investigation of the incident.

On Sept. 8, British Airways flight 2276 was on a McCarran International Airport runway bound for London when the crew screeched the plane to a halt as flames billowed. All 157 passengers and 13 crew members survived, some with minor injuries.

Updated findings released Tuesday by the National Transportation Safety Board indicated the fire started with the spool in the left engine. The spool's function in the high-pressure compressor gives the plane power, making it a key part of the engine.

"We're doing a full pare down of the spool and analysis of the components," said Rick Kennedy, a spokesman for GE Aviation.

The twin-engine Boeing 777 was built in 1998 and registered to British Airways a year later. By the end of 2013, it had flown nearly 77,000 hours, according to the British Civil Aviation Authority. GE90 engines are used in most Boeing 777s.

GE Aviation said that the spool, which holds the blades in the GE90-85B engine, was among the first ever made for that model in 1995.

The manufacturer is voluntarily analyzing 38 similar spools that are about the same age but are out of service awaiting maintenance and repairs. Other inspections of working engines are expected.

"The 38 will help us decide what engines might need to be inspected," Kennedy said.

GE said this is the first engine failure of its kind, as spools can be similar in design but are not built identically. There are about 400 base GE90 engines being used to power 167 planes.

The NTSB also said the case will be analyzed to determine a probable cause after the current fact finding process. A final report won't be issued for several months.