Nearly a year after race car driver and car designer Carroll Shelby died, his spirit lives on in a 2013 Ford Mustang with the most powerful series production V-8 in the world and unmistakable Shelby Mustang styling. With a top speed of 200 miles per hour, the 2013 Ford Shelby GT500 Coupe is breathtaking, even daring, to drive. 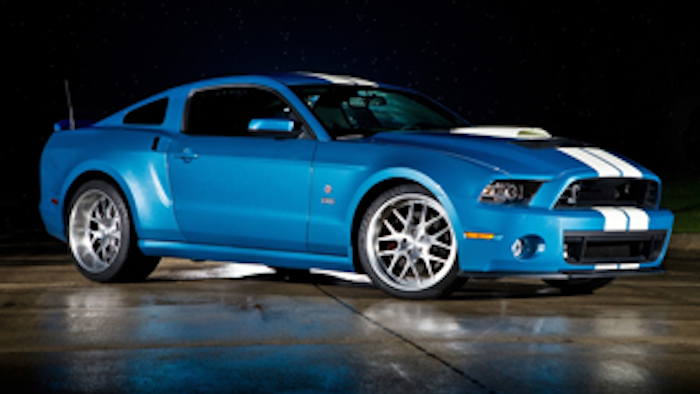 Nearly a year after race car driver and car designer Carroll Shelby died, his spirit lives on in a 2013 Ford Mustang with the most powerful series production V-8 in the world and unmistakable Shelby Mustang styling.

With a top speed of 200 miles per hour, the 2013 Ford Shelby GT500 Coupe is breathtaking, even daring, to drive — perfectly in character with the rugged Formula 1 race car driver.

The 5.8-liter Ford V-8 under the car's raised hood is supercharged to generate a whopping 662 horsepower and 631 foot-pounds of torque.

From a standstill, unless the accelerator was pressed with a feather-light touch, the test car's big, wide and somewhat worn rear tires could be overwhelmed by the power, sending the car's rear end fishtailing.

It made for lightning quick turns and grand exits — and a feeling that somewhere, Carroll Shelby was grinning mischievously.

Intriguingly, this 2013 Shelby two door, which is the ultimate Mustang this model year, is built on the same Flat Rock, Mich., assembly line as more basic and less pricey Mustangs.

While these prices are up there, the four-seat Shelby is something of a bargain, given all the power that comes with the price.

As a comparison, the starting manufacturer's suggested retail price, including destination charge, for a 2013 Chevrolet Camaro ZL1 with 580 horsepower and 556 foot-pounds of torque is $56,550. Note this Camaro price includes the federal government's gas guzzler tax of $1,300. The 2013 Shelby GT500 does not incur the gas guzzler tax.

Meantime, a 2013 Chevrolet Corvette ZR1 with supercharged V-8 developing 638 horses and 604 foot-pounds of torque has a starting MSRP, including destination charge, of $113,595.

In his late 80s as the 2013 Shelby GT500 was being developed, Shelby collaborated with Ford and drove the car himself for up to eight hours at a time at Ford's proving grounds.

It wasn't a memorial car, exactly, to Shelby, who had health problems for many years. But it was a car with his name on it, and the gritty Texan wasn't about to miss out on making it his own.

Fittingly, the test car snapped passersby to attention with its long hood, wide body stripe going from front to back and an awesome, deep exhaust note. In fact, a neighbor didn't see the test car in the residential garage but heard it before it emerged and came running.

People who admitted they couldn't afford such a car, or wouldn't have the nerve to drive one, wanted their pictures taken with this Shelby. No doubt, a few photos went up on Facebook.

Still, this Shelby GT500 isn't a limited-production model. Ford will match production with demand, with up to 10,000 sales in a year anticipated.

For car buffs, the test car could be emotional. As an example, after a satisfying drive, it was not unusual to caress the fender flares and put hands out on the hot hood of the test car to soak up the full experience.

And even non car buffs can find his or her pulse quickening.

The reason: With the power and speed of this car, driver reactions need to be quick, and the ride can be harsh.

Driver and passengers in the test car dropped down to get in the car and snugged into optional leather, Recaro form-fitting front seats. Views out front included the raised hood, and the 4.5-foot-tall Shelby GT500 sat lower than many other cars on the roads.

But the low-to-the-ground stance and wide track of this Mustang made it feel securely planted.

There was no ignition start button in this Shelby, just an old-fashioned ignition keyhole. A quick turn of the key, and the big, 5.8-liter, double overhead cam, supercharged V-8 rumbled to life and the optional Shelby instrument panel colorfully came alive.

The driver had to have a strong left leg to depress the clutch pedal in the test car. And for someone 5 foot 4, the driver seat had to be moved up so far that the driver's knee sometimes rubbed against the lower part of the steering wheel assembly.

Honestly, it felt like being in a race car, where the driver sits close to the steering wheel — it's called "up on the wheel." But race cars don't have frontal air bags, so short-statured drivers in the Shelby GT500 have to sort out the seat track position and a bit of seatback recline to get the advised 12 inches of separation from chest to air bag.

This car goes from zero to 60 mph in less than 4 seconds, giving the sensation of a dragster during flat-out starts.

Premium gasoline is required for the 16-gallon tank. While the federal government's fuel economy rating for this car is 15 miles per gallon in city driving and 24 mpg on the highway, the test car averaged much less — 14.4 mpg in combined city/highway travel.

OK, it was "what a hoot" kind of driving, not sedate driving.

But after just 114 miles, the gas gauge indicated the tank was already half depleted.

The two back seats are cramped, low and difficult to get into. Not even children would want to sit there for long.

There is a sizable liftover to get items into the 13.4-cubic-foot trunk.