Technavio’s latest report on the global assembly-line robots market provides an analysis of the key trends expected to impact the market through 2016-2020. 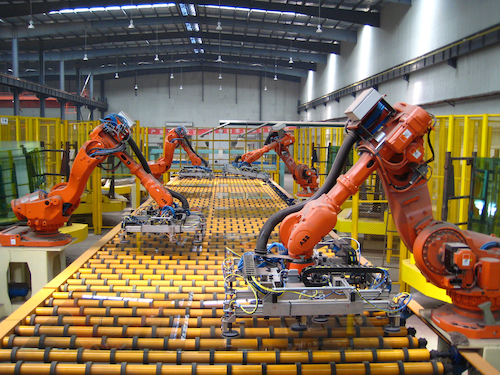 LONDON — Technavio’s latest report on the global assembly-line robots market provides an analysis of the key trends expected to impact the market through 2016-2020. Technavio defines an emerging trend as a factor that has the potential to significantly impact the market and contribute to its growth or decline.

According to Bharath Kanniappan, lead research analyst at Technavio for robotics, “The rapid rate of industrialization in emerging economies such as India and China, as well as the shift to advanced automated manufacturing in countries such as Germany, has sparked a growing trend towards industrial robotization.”

For example, Fanuc, a provider of factory automation, developed heavy-lifting industrial collaborative robots CR-35iA that do not require fences. These robots are equipped with integrated vision technology that automatically halts the robot's operation on physical contact with human operators, thus ensuring a safe working environment. These machines are designed to offer higher efficiency, can lift loads weighing up to 77 lbs., and can be deployed in assembly lines.

Many research institutes, companies, and governments worldwide are focusing on research initiatives to develop advanced robotic technologies. Research projects are in progress to incorporate cloud technology into robotics. Cloud-based robots would facilitate automatic real-time transfer of data into cloud platforms.

“Large industrial robots have served on factory floors for decades, but these machines are expensive and must be caged to ensure human safety. However, new concepts of collaborative robots are gaining ground, where these robots work hand-in-hand with human workers to speed up operations,” says Bharath.

In companies such as ABB, human and robot team-mates swap tasks to maintain efficiency and speed up industrial processes. An experiment by researchers of MIT concluded that co-operative processes between humans and robots reduced human idle time by almost 85 percent.

The concepts of smart factories and robotic factories are gaining significance, with some companies opting for complete robotization in their factories. In robotic factories, most work processes are controlled and operated by robots from start to finish, requiring humans only to oversee overall operations.

In 2015, China became the first nation to experiment with robotic factories, with the city of Dongguan incorporating unmanned factories for the first time. Through its "Robot Replace Human" program, the city is expecting to finish 1,000-1,500 of these projects by 2016.

Although other countries such as Germany are also making efforts to automate plant facilities, China is considered to be the major market where this trend has evolved, as it is the largest user of industrial robots.

Integration of the IoT in robotics

Growth in the IoT concept and technological advances have boosted the use of automated technologies in various industries. The high penetration rate of smart devices and use of wireless and cloud technologies will change the face and mode of operation of robots in the near future.

Vendors are offering their services and control modules through smart devices and Wi-Fi technology for remote operation of industrial robots, including assembly robots. Since these devices offer more flexibility and convenience in operations, end-users prefer these technology-enabled robots in factory facilities.

While there are always concerns regarding possible data breaches and hacking, Technavio expects future robots to feature cloud-enabled services. Implementing the IoT in factories transforms the factory into a connected entity.