One lab will focus on artificial intelligence and robotics. The other two will lead the development of a new product management science seeking to deliver higher returns on commercial technology. 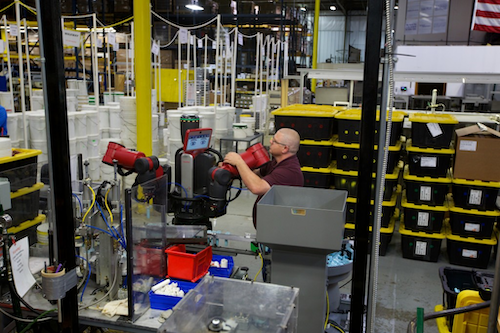 GE will open three advanced technology labs at its global research headquarters in Niskayuna, New York. One lab will focus on artificial intelligence and robotics. The other two will lead the development of a new product management science seeking to deliver higher returns on commercial technology. The company plans to hire some 100 new employees with PhDs and advanced degrees to staff them.

GE has already started using AI, robotics and software to make things. Technologies and systems like the digital thread and the brilliant factory allow the company to connect plants to Predix, its cloud-based software platform. They can track parts and products from the supply chain to production and during operations, learn from the process, improve it and lower manufacturing costs.

Scientists at the two product management labs, the Performance and Cost Lab and the Science of Product Leadership Lab, will work on new ways to bring products to market in a more cost-effective way and with higher returns on investment. The Edge Lab will focus on AI and robotics. “Our transformation into a digital industrial company requires our workplace and employee skill sets to transform too,” said Vic Abate, GE chief technology officer and head of GE Global Research. “We see product management as the next frontier in science. Product management is not new, but it hasn’t been practiced as a science. This is a wholly new approach to it, similar to what Galileo did for astronomy or Sir Isaac Newton for physics.”

Abate said the world was brimming with innovation. “The key difference in today’s ultra-competitive environment is the ability to move technology into the marketplace faster and with the greatest benefit to the company and its customers,” he said.

The first GE research lab opened in nearby Schenectady, New York, in 1900. Three people worked inside the wooden structure before it burned down a year later.

It was an inauspicious beginning for one of the largest corporate research institutions in the world. GE Global Research now employs 3,000 people and runs nine labs in the United States, Brazil, China, Germany, India and Israel. Over the years, the labs have employed several Nobel laureates and developed breakthrough technologies like LEDs, brain MRI and new ceramic composite materials called CMCs for the next-generation of jet engines.

The scientists share their insights with an army of 47,000 engineers working inside GE businesses: from healthcare to oil and gas and aviation. The real payoff comes when they can use the same technology to build a better jet engine as well as to improve on a gas turbine. GE calls the approach the GE Store.