“Nadine” is a humanoid social robot that looks like a young woman, can recognize people, remember conversations, and show moods such as happiness or sadness as appropriate to the conversation. 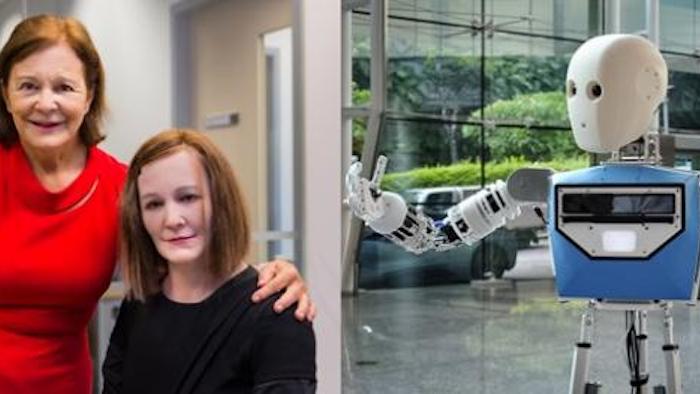 Imagine walking into a student center and finding a robotic receptionist.

Nanyang Technological University (NTU) in Singapore, which also has a great arts building, has made just that. Their “Nadine” is a humanoid social robot that looks like a young woman, can recognize people, remember conversations, and show moods such as happiness or sadness as appropriate to the conversation. It was created by Nadia Thalmann, a professor of computer engineering and the director of the Institute for Media Innovation, and runs on intelligent conversational software.

Thalmann has studied the rise of social robotics at NTU for four years, pulling in researchers from psychology and linguistics as well as computer science and engineering.

“As countries worldwide face challenges of an aging population, social robots can be one solution to address the shrinking workforce, become personal companions for children and the elderly at home, and even serve as a platform for healthcare services in future,” said Thalmann.

As well as creating a humanoid robot, NTU is also home of a telepresence robot called EDGAR, whose slightly less humanoid frame can be used for video or scripted communication. If used for true telepresence, EDGAR’s face will display the face of the speaker, but EDGAR can also speak autonomously. As such it is the type of social robot that could be used at public venues to provide directions and other useful information to visitors.

EDGAR was developed by Gerald Seet, an associate professor at the School of Mechanical & Aerospace Engineering, and the BeingThere Centre at NTU. Seet said that he sees telepresence robots as enabling educators and executives to conduct business around the world without traveling, or to speak to large groups in different locations simultaneously.

“EDGAR is a real demonstration of how telepresence and social robots can be used for business and education,” Seet said. “Telepresence provides an additional dimension to mobility."

NTU next plans to explore how they can work with industry on commercializing both technologies. Some companies have already expressed interest, the university said.