The Move to Lighter, Stronger, Cheaper Materials for Transportation

Materials processing is as old as civilization, but since the beginnings of the Industrial Revolution manufacturing technology has gone through three distinct phases. 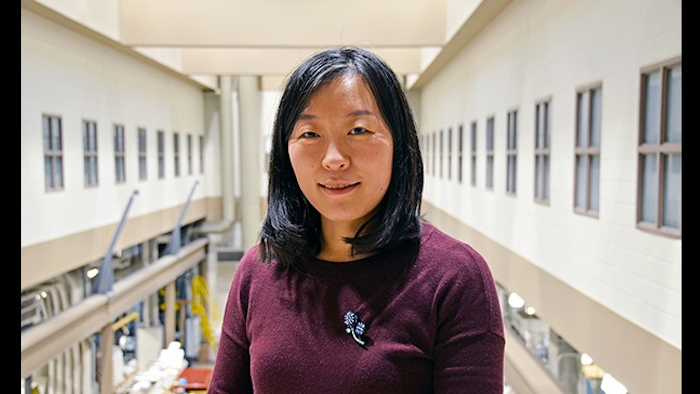 Jingjing Li came to Penn State in 2016 from the University of Hawaii in Manoa. Image credit: Penn State College of Engineering

Materials processing is as old as civilization, but since the beginnings of the Industrial Revolution manufacturing technology has gone through three distinct phases. The first phase was mechanical mass production, including the assembly line, standardization of parts and the invention of new machines. Mass production is still dominant, but toward the middle of the twentieth century, an electronics revolution began with the invention of the transistor. This phase is characterized by Moore’s Law, which for 50 years reflected the multiplication of speed and the reduction in cost of computing. The current phase is cyber/digital, which is anything related to computer-aided design (CAD) and information sharing, according to Jingjing Li, William and Wendy Korb Early Career Professor (associate professor) of industrial and manufacturing engineering. Li came to Penn State in 2016 from the University of Hawaii in Manoa.

Her research is primarily concerned with how things are made – the tools and methods of manufacturing – with a particular interest in methods such as advanced welding techniques used to join the new materials that are being introduced into the automotive and aerospace industries.

Advanced manufacturing can require the bonding of incompatible materials. Li is an expert in new techniques that can bond materials when traditional bonding doesn’t work.

“My research is in lightweighting – how to make a car lighter by using advanced materials such as aluminum, magnesium or carbon fiber composites” she explains. “The benefits of such advanced materials lie in their high strength-to-weight ratio, which makes it possible to reduce the vehicle’s weight and thus reduce greenhouse gas emissions.”

But traditional bonding won’t work with dissimilar materials that have different melting temperatures. If the materials can’t fuse, or if they form an intermetallic compound that is brittle or prone to fracture, other bonding methods are required. One such method is called friction stir welding.

“There are two types of welding,” says Li, “fusion, which is what most people are familiar with in welding shops and garages across America, and solid state welding, which doesn’t melt the metal. The latter doesn’t apply any external heat source; friction alone heats the metal to a plastic state. For instance, aluminum is a softer metal than steel and the friction stir technique works well to bind aluminum and steel together.”

Invented in Great Britain in the early years of this century, friction stir uses robots to apply a spinning metal pin at the juncture of two materials, which then soften and bond along a weld.

Li uses a somewhat similar technique, patented by General Motors, that is a combination of friction stir and mechanical riveting. Called friction stir riveting, the technique drives a rivet into friction-softened materials. Once the rivet is locked, the rivet binds the materials.

“In the future, researchers are also looking to friction stir to bond higher strength steels,” she says. “We’ve been talking with Zi-Kui Liu (Penn State professor of materials science and engineering) about simulating friction stir to get a better idea of what is happening in the bond formation.”

Lightweighting is important in the automobile and aerospace industry, both of which are driven to reduce fuel consumption without losing the strength of traditional heavier materials. Boeing’s 787 Dreamliner, for example, uses advanced composites, which account for 50 percent of the airplane’s total weight. Along with allowing for a lighter structure, the composite materials are better at resisting impacts, easier to repair, and do not fatigue or corrode.

In the automotive realm, a 10 percent reduction in vehicle weight can reduce fuel usage by 6-8 percent. The DOE’s Vehicle Technologies Office says that replacing cast iron and traditional steel components with high-strength steel, magnesium alloys, aluminum alloys, carbon fiber, and polymer composites can reduce the weight of a vehicle’s body and chassis by up to 50 percent. Lightweight materials are particularly important for hybrid and electric vehicles, as they could lead to smaller and less expensive batteries and greater driving range.

Another area of Li’s research is the characterization of composites used in the automotive industry, supported by the Ford Motor Company. Using X-ray computed tomography (CT), which combines multiple X-ray images into a three-dimensional image, she studies and characterizes the microstructure of advanced composite materials. The microstructure of composites varies with changes in processing and can have important impacts in the materials’ performance.

“We use the Materials Characterization Lab quite a bit,” she remarks. “The transmission electron microscopes and the scanning electron microscopes and sample preparation. We’ve invited the MCL researchers to come over here (Leonhard Building) to give short talks on the various techniques they have in the Millennium Science Complex, X-ray diffraction, etc. In summary, my research involves materials characterization and mechanical behavior.”

Li was an assistant professor in Hawaii for five years prior to coming to Penn State. In that time, she received the National Science Foundation Faculty Early Career Award, a prestigious award for outstanding research by junior faculty. Her work on joining of dissimilar metals was rewarded with a $500,000 grant. Li received her bachelor’s degree in materials science and engineering from Beihang University in Beijing, China; a master’s degree in materials science and engineering from Tsinghua University in Beijing; and a master’s degree in statistics and a Ph.D. in Mechanical Engineering from the University of Michigan in Ann Arbor.

“For instance, I believe I can connect those two areas to make things more practical, because while materials scientists want to publish in high impact journals, it takes a long time to translate those findings into reality. But manufacturing is tied to industry, and so we can bring our research into the real world much sooner.”

Note: This article orginally appeared in the Fall 2017 issue of the Materials Research Institute Bulletin, Focus on Materials.