These Engineers 3D Printed A Mini Jet Engine, Then Took It To 33,000 RPM

“We wanted to see if we could build a little engine that runs almost entirely out of additive manufacturing parts.” 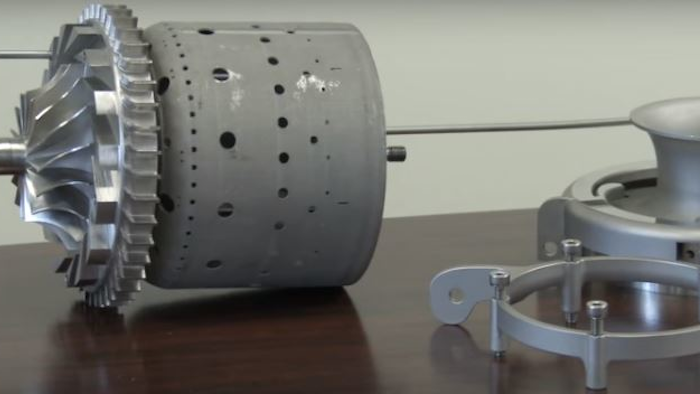 Consider it a jet engine for the Oompa-Loompas. GE engineers working on the future of aircraft manufacturing recently showed off some of their capabilities. They made a simple 3D-printed mini jet engine that roared at 33,000 rotations per minute.

The backpack-sized jet engine was built by a team of technicians, machinists and engineers who work at a GE Aviation’s Additive Development Center outside Cincinnati, a lab focused on developing additive manufacturing, a next-generation technique that can make complex 3D structures by melting metal powder layer upon layer. They built the engine over the course of several years to test the technology’s abilities and to work on a side project together.

"We wanted to see if we could build a little engine that runs almost entirely out of additive manufacturing parts,” says one of the engineers. “This was a fun side project.”

The GE team couldn’t build the complexity of a whole commercial aircraft engine into their working model. Instead, they got plans for a simpler engine developed for remote control model planes and customized them for their 3D printing machines. Their final product measures around a foot long by about eight inches tall.

When they were finished, they mounted it inside a test cell typically used to try out full-scale engines and fired it up. The model engine is now on display at the Additive Development Center with other display pieces.

In contrast to traditional machining methods that typically cut parts out of larger pieces to get to a finished shape, additive manufacturing uses lasers to fuse thin layers of metal on top of each other to build parts from the ground up. This advanced technique means less material waste and more complex parts that can be built precisely to optimize how they work inside a machine.

The development team has already registered a major victory for using additive manufacturing in producing aircraft components. They designed and developed a fuel nozzle that will be additively manufactured for inclusion in the CFM LEAP jet engine for commercial single-aisle aircraft.

“There are really a lot of benefits to building things through additive,” says Matt Benvie, spokesman for GE Aviation. “You get speed because there’s less need for tooling and you go right from a model or idea to making a part. You can also get geometries that just can’t be made any other way.”