Aside from the springs and steel barrel, the rest of the gun isn't metal. 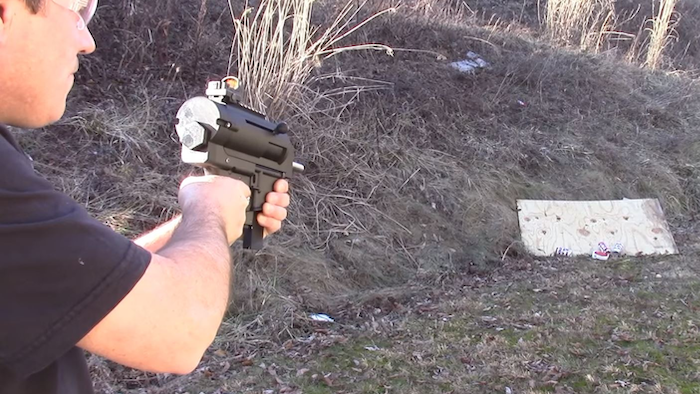 A man posted a video Sunday demonstrating the firing of a 9mm semi-automatic weapon that he constructed mostly out of 3D-printed parts.

The man, whose YouTube profile name is “Derwood,” fires the weapon he calls “shuty-MP1" eight times over the course of the 12-second-long video.

Shuty-MP1, made almost entirely of PLA filament printed from a Fusion3 F306 printer, was finalized after almost a year of tinkering, Derwood said in an interview with Ars Technica.

"The first model required some welding and machining, and the goal was to keep it simple so that anyone could build it," said Derwood. "It is now to that point."

Aside from the springs and steel barrel, the rest of the gun isn't metal.

Derwood told Ars that he works as a carpenter in West Virginia, and that he belongs to FOSSCAD. According to its website, FOSSCAD is a group dedicated to creating and sharing CAD files. Derwood hasn’t released the CAD files needed to create copies of the shuty-MP1.

Citizens can legally build their own firearm without a license, however, "manufacturing such weaponry for sale or transfer does require a federal license," according to Ars.

In May 2015, a gun rights group filed a lawsuit against the State Department when it wasn’t allowed to publish files for 3D-pritned firearms.

A video of the shuty-MP1 assembly can be viewed here.