Softbank's Humanoid Robot With 'Heart' To Go On Sale

The robot is equipped with a "heart" designed to recognize and react to human emotions. 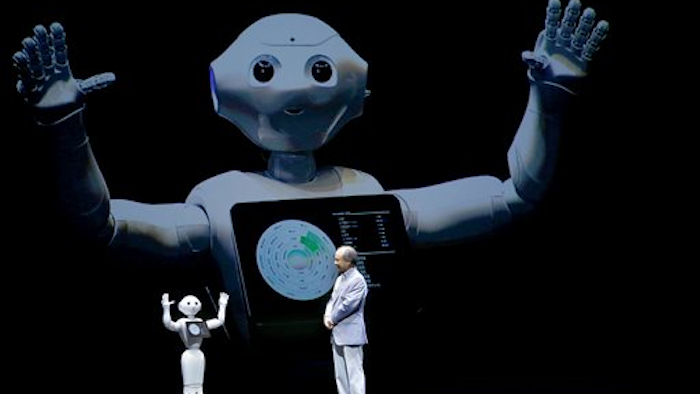 Technology company Softbank's Pepper robot is going on sale in Japan on Saturday, equipped with a "heart" designed to not only recognize human emotions but react with simulations of anger, joy and irritation.

The robot, which has no legs and moves on wheels, was shown to reporters and guests at a Tokyo area theater Thursday. It has a hairless head and moving arms and went through a year of software development after first being announced.

It glided proudly on to the stage, conversed with celebrity guests such as Alibaba founder Jack Ma, did a dance, sang a birthday song and demonstrated how it could record family life in photos, and serve as a companion. It appeared to respond with joy when it was praised or stroked.

Softbank Corp. CEO Masayoshi Son said the company was preparing for a global sales launch with partners Alibaba Group of China and FoxConn of Taiwan, which will each take a 20 percent stake in Softbank's robotics unit, and help with software and manufacturing.

Details of when and where it will go on sale outside Japan were still undecided, but Son said the first overseas sales will likely happen next year, with experimental sales likely happening later this year. It sells for 198,000 yen ($1,600) in Japan.

According to Son, the robot will develop its own personality of sorts, depending on what family owns it and how people interact with it. Pepper can remember faces and is programmed to be happy when it is given attention but becomes irritated and depressed when it is not.

Son gushed with emotion himself when explaining to reporters and guests what was in store for Pepper, stressing the company's commitment to robots, especially smart robots that can provide emotional interaction in everyday life.

He said the inspiration for Pepper came from his childhood memories of Astro Boy, an animated Japanese character which did not have a heart and could not understand why people cried. He made a point of programming Pepper to look like it weeps: lights well up in its round eyes.

Although he acknowledged some may not agree with the idea of making robots that appeared to have human traits, he said such technology could be transformative.

The world already has robots that help in manufacturing, and mankind has already made the car and the plane, but what it needs is love, he said with a straight face.

"Our vision is to offer a robot with love," he said.