The San Francisco-based Good Eggs is among a new crop of startups using technology to bolster the market for locally produced foods that backers say are better for consumer health, farmworkers, livestock and the environment. These online marketplaces are beginning to change the way people buy groceries and create new markets for small farmers and food makers. 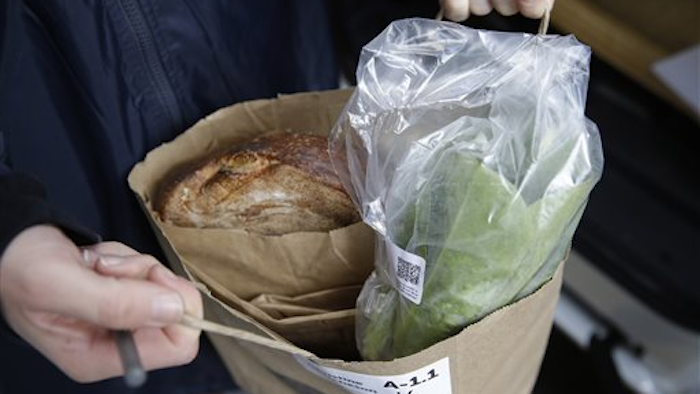 SAN FRANCISCO (AP) — Sara Pasquinelli doesn't shop at the grocery store much anymore. The busy mother of two young boys buys nearly all her food from a new online service that delivers to her front door — but it doesn't bring just any food.

The emerging tech startup specializes in dropping off items that Pasquinelli probably would only be able to find at her local farmers market.

"I don't even remember the last time I went to the store for anything other than bananas and string cheese," said Pasquinelli, an attorney who started using the service about a year ago.

The San Francisco-based Good Eggs is among a new crop of startups using technology to bolster the market for locally produced foods that backers say are better for consumer health, farmworkers, livestock and the environment. These online marketplaces are beginning to change the way people buy groceries and create new markets for small farmers and food makers.

"It's a new way of connecting producers with consumers," said Claire Kremen, a conservation biology professor at the University of California, Berkeley. "The more alternatives people have access to for buying food outside the industrial agricultural regime, the better it can be."

The Good Eggs website features attractive photos of offerings such as Hachiya persimmons, chanterelle mushrooms, grass-fed beef steaks, pureed baby food and gluten-free poppy seed baguettes. It also has pictures and descriptions of the farmers and food makers. Prices are similar to what shoppers pay at a farmers market, and customers can pick up their orders at designated locations or have them delivered for $3.99 — usually two days after they're placed.

"There's this wave of entrepreneurship and creativity happening in the food world, and Good Eggs is all about bringing that high-quality production right to your door," said CEO Rob Spiro, who co-founded the startup after he sold his last company, a social search service called Aardvark, to Google Inc. for $50 million in 2010.

Good Eggs offers more varieties of fruits and vegetables than most supermarkets, but the selection is limited to what can be grown and made locally, so you can't buy bananas in San Francisco in December.

The service started in the San Francisco Bay Area last year and recently launched in New York, Los Angeles and New Orleans. There are plans to expand into more markets next year.

The founders, Silicon Valley engineers, say they want to grow the market for local food that's led to the proliferation of farmers markets and community-supported agriculture programs that deliver boxes of fresh fruits and vegetables.

The company is entering an increasingly competitive market for online grocery delivery. Major retailers such as Walmart and Safeway deliver groceries and Amazon launched its AmazonFresh service in San Francisco this month. Another San Francisco startup called Instacart allows customers to order groceries from local supermarkets and delivers in as little as an hour.

Good Eggs currently sells food from about 400 local producers that meet the company's standards for environmental sustainability, workplace conditions and transparent sourcing of ingredients. Produce is usually picked one or two days before it's delivered.

The startup is helping farmers such as Ryan Casey, who runs a small organic farm that grows more than 50 types of fruits, vegetables and flowers. His Blue House Farm in Pescadero, about 45 miles south of San Francisco, mainly sells its produce at farmers markets and through community agriculture programs, but Good Eggs makes up a growing share of business.

"They're really good at marketing and finding people and connecting people with the food, which leaves me more time to do the growing," said Casey, standing in a field of leafy greens.

Good Eggs has attracted enthusiastic foodies like Shelley Mainzer, who does nearly all her grocery shopping on the website and often emails producers with questions and comments.

After her weekly order arrived at her downtown San Francisco office, she pulled out organic cauliflower and Romanesco broccoli she bought from Blue House Farm.

"I can't eat store-bought food anymore because it just doesn't taste the same," said Mainzer, who works as an executive assistant at a small investment bank. "You basically remember what things are supposed to taste like when you eat these fresh vegetables and fruits."