Whirlpool is moving production of its commercial front-load washing machines from Mexico to Ohio. The appliance maker, whose brands include Maytag, Kenmore and its namesake, said Friday that 80 to 100 new jobs will be created in Ohio over the next three years to support the relocation. 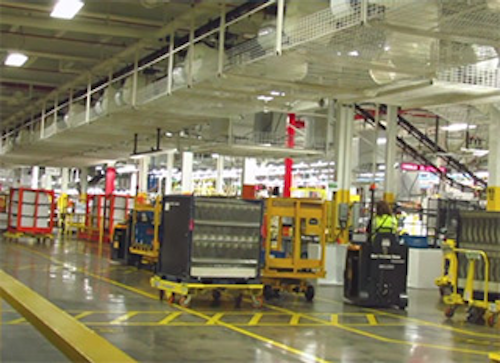 The appliance maker, whose brands include Maytag, Kenmore and its namesake, said Friday that 80 to 100 new jobs will be created in Ohio over the next three years to support the relocation. The Clyde, Ohio, plant is 2.4 million square feet, which Whirlpool says is the largest washing machine plant in the world. The company currently makes all of its residential washing machines for the U.S. at the plant.

Whirlpool said that the move is part of its efforts to build products in the regions where they are mostly sold. It does not anticipate any interruption in the supply of commercial washers during the transition.

Whirlpool currently has about 15,000 U.S. manufacturing employees. The company said that 80 percent of the products it sells in the U.S and made in the country.

The front-load commercial washing machines are sold for use in laundromats, hospitals, hotels and other commercial settings. The product is mostly sold in the U.S., with approximately 10 percent exported to Europe, Australia, Latin America and Asia.

Production is expected to start in the U.S. in April.

The Monterrey, Mexico, plant is adding a new residential washer production line to serve the Mexican market. Employee levels at the plant are expected to be maintained.

Want to read more about what Whirlpool is doing to make U.S. manufacturing more efficient and cost-effective than ever? Check out our coverage of its Clyde plant and the roll-out of new RFID technology.