A Massachusetts startup company is launching a new device that transforms almost any bicycle into an electric-hybrid vehicle. Superpedestrian Inc. of Cambridge says its so-called Copenhagen Wheel is a self-contained unit that replaces the rear hub of a bicycle wheel. It's packed with an onboard computer, batteries and sensors that determine when a biker needs a boost. 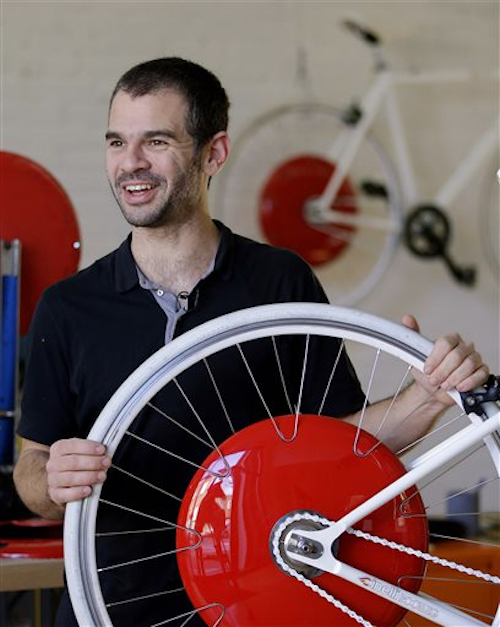 CAMBRIDGE, Mass. (AP) — A Massachusetts startup is launching a new device that transforms almost any bicycle into an electric-hybrid vehicle using an app on a smartphone.

The device, called the Copenhagen Wheel, is installed as part of a rear hub of a bike wheel and is packed with a proprietary computer, batteries and sensors that monitor how hard a rider is pedaling and activate an onboard motor whenever support is needed. The device uses wireless connectivity to communicate with the biker's smartphone to track distance traveled and elevation gained, share with friends the number of calories burned and lock the wheel remotely as soon as the owner walks away from the bike.

"The motor integrates itself with the rider's motion very, very seamlessly," said Assaf Biderman, who co-invented the device at the Massachusetts Institute of Technology's SENSEable City Lab, where he is associate director. "It's almost like having a riding companion riding together with you, making the ride easier, simpler."

The combination of power from the Copenhagen Wheel and the cyclist's energy can make an average biker move "almost like a Tour-de-France-level athlete in your daily commute," said Biderman, who founded Cambridge, Mass.-based Superpedestrian Inc. that secured an exclusive license for the technology from MIT.

The Copenhagen Wheel packs sufficient power to propel a rider as fast as 60 kph (37.28 mph), but developers have put speed limits in software to meet local speed limits, effectively turning off the motor once the speed reaches 20 mph in the U.S. and 25 kilometers in Europe.

The concept was inspired by a simple question: "How can we get more people to cycle?" Biderman said.

The project received funding from the Italian ministry of the environment and office of the mayor ofCopenhagen, a Danish city known as one of the most bicycle friendly locations in the world and whose tourism website says 55 percent of its residents bike 1.2 million kilometers (750,000 miles) every day.

The initial 1,000 units of the Copenhagen Wheel became available for pre-order through the Superpedestrian website earlier this month. Two weeks later, at least 810 had been sold for $699 each, the majority of them to customers in the U.S. Other orders went to Europe, Australia, Kenya, Madagascar and elsewhere. Shipping is scheduled for next spring.

The Copenhagen Wheel does not replace a cyclist's existing bicycle. Consumers get the stylish hubcap-sized device already installed on a new rear wheel that fits their current bicycle. They remove the current wheel from their bike and install the souped-up unit and they are ready to go. The batteries are rechargeable.

The Copenhagen Wheel seeks to tap into a lucrative and highly competitive market for electric bikes, also known as e-bikes.

In a recent report, clean-technology consulting company Navigant Research estimated that worldwide revenue from electric bicycles will grow from $8.4 billion this year to $10.8 billion in 2020, fueled in part by desire for a viable alternative to increasingly congested city roads that makes crawling in car traffic less palatable.

In the U.S., the trend is reflected in Census Bureau data showing the number of bicycle commuters rose 60 percent in the decade ending in 2010.

"Over the past few years we've seen a cycling renaissance throughout the world," Biderman said. "People are looking for alternatives."

More on the Copenhagen Wheel: http://www.superpedestrian.com