How Ice Could Change Industrial Cleaning

Foster Coulson discusses how using ice could be the next innovation to industrial cleaning. 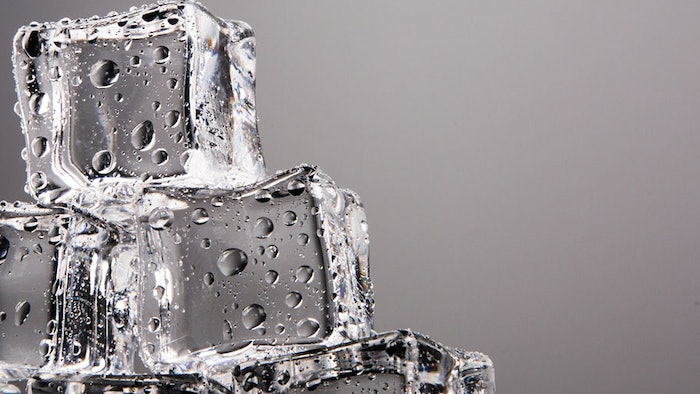 Water cleans. Even among the diverse animal kingdom, those two words are consistently synonymous.

But why is water by far the most popular cleaning agent on earth? It’s a bit of a crazy question, but it’s worth considering its cleaning properties, because otherwise you’d have to wonder why we use anything else at all. It is relatively accessible and inexpensive, easy to dispose of through drain and sewer systems and is considered the universal solvent, as it is able to dissolve more substances than any other liquid. Most of all, it is not harmful to humans or the environment.

And yet there are cleaning applications where water struggles, as anyone having to wash out the bottom of a pan forgotten too long on the stovetop can appreciate. To achieve industrial cleaning, pressure washing requires intensely high pressures and water usage and, even then, is not sufficient for many applications. That fluid property that made disposal so easy through drainage becomes a hazard when rushing gallons, carrying contaminates from the cleaning surface, drain into nearby drinking supplies.

So, unable to find all answers in the rain, people turned to the sands of the desert. But sandblasting has its own hazards; workers get silicosis, contaminated sand and blasted off particulates become airborne and blow into the surrounding environment with the wind, and there are huge piles of waste media to clean up after.

But what about ice? After all, it’s just a different kind of water. But an ice storm hits harder than rain. Ever felt the sting of hail and wondered if it might strip the lacquer off your wooden deck? Well now it can.Coulson Ice Blast has come out with a new industrial cleaning technology, starting with the release of their IceStorm90 unit. It works by crushing up standard ice cubes (purchased from ice cube suppliers or produced onsite with standard ice cube machines) and then feeding these crushed particles of ice into a pressurized airstream, before blasting them at high speed out of a nozzle. Even with significantly lower pressure (60-150 psi) and 35 times less water usage than pressure washing, this ice blasting technology encroaches on areas once only reachable with sand.

Ice is the only media that uses all three phases to advantage during blasting: its solid phase to knock off contaminants with maximum impulse, as well as for scrubbing the surface, its liquid phase for dissolving and washing away ionic compounds, as well as for dust containment, and its vapor phase for evaporating and leaving behind minimal residue.

Since the ice melts on impact and becomes a mist around the work area, blasted off particulates are made damp and heavy and are kept from staying airborne. Excluding exceptional cases, ice blast operators do not usually require special breathing apparatuses, as tests have shown air quality levels, even while blasting off lead paint, to be 10 times cleaner than levels that would require them.

Due to the low water usage and energy of impact, much of the extra water evaporates, leaving behind a neat pile of easily contained pollutant in a tarp placed beneath the blast zone. Blasting in enclosed spaces is thus made possible, using a media that leaves behind both clean air and little residue.

The technology is at its best against thick grease, loose/primerless paint, marine growth, resins, nuclear decontamination and hazardous material abatement, among others.

The blasting industry has not seen much change in the past 50 years, despite pressure from a sharp increase in environmental laws over that period.  Sandblasting and highly wasteful pressure washing have remained the kings of industrial cleaning. So it’s exciting to see a new technology enter the market designed to tackle the issues inherent to both of them.

And who knows, maybe someday ice will challenge liquid water as earth’s cleaning media of choice. They say that laying in a cold ice bath once in a while is good for the pores.