The project provides an immersive tour of one of the world’s major archaeological sites. 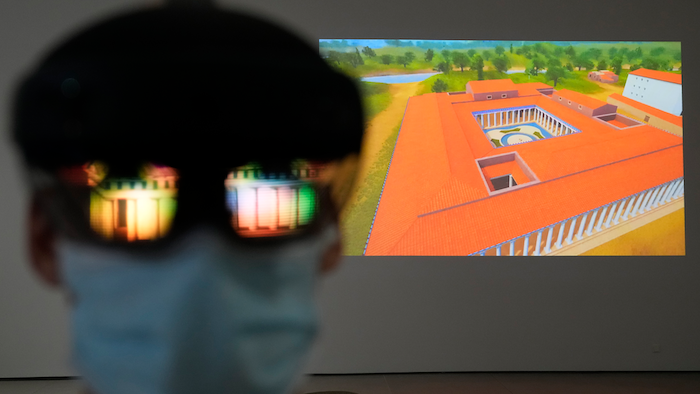 The image of an ancient temple reflected on a mixed-reality HoloLens headset worn by museum technician Kostas Baskakis at the Olympic Museum in Athens, Nov. 9, 2021.
AP Photo/Thanassis Stavrakis

OLYMPIA, Greece (AP) — What would it be like to walk around the ancient religious sanctuary of Olympia when the Olympic Games were held?

An unusual partnership between Microsoft and Greece’s Ministry of Culture and Sport is offering visitors the answer, providing an immersive tour at one of the world’s major archaeological sites that launched Wednesday.

The program at ancient Olympia harnesses augmented reality technology that designers say has the potential to transform education, business and entertainment. Critics warn it also will extend the invasive power of U.S. tech giants.

The culture ministry helped Microsoft map and build virtual representations at Olympia, a site used over nearly a thousand years to host the games in ancient Greece that served as the inspiration for the modern Olympics.

Users can tour the site remotely or in person with an online presentation and an augmented-like mobile app at Olympia, seeing a virtual re-creation of temples and competition areas as they walk through the ruins. At the Olympic Museum in Athens, they can use mixed-reality HoloLens headsets that overlay visual information on top of what the viewer sees.

Tilt up and a towering statue of Zeus plated in ivory and gold comes into view; turn left and peer into the workshop used by the famed sculptor Phidias at the ancient sanctuary more than 2,400 years ago.

Microsoft started the project last year, scouring Olympia with drones and sensors, after reaching an agreement with the Greek government to build three data centers in greater Athens in an investment to reach up to $1 billion.