Fed to Discuss Pullback in Aid with Inflation Up 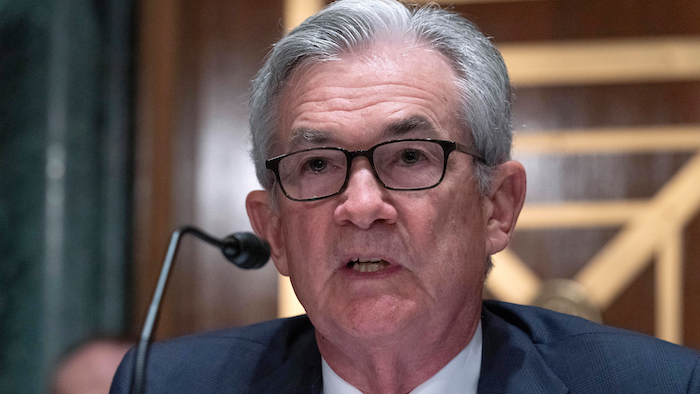 WASHINGTON (AP) — With inflation uncomfortably high and the COVID-19 Delta variant raising economic concerns, a divided Federal Reserve will meet this week to discuss when and how it should dial back its ultra-low-interest rate policies.

For now, the U.S. economy is growing briskly in the wake of the pandemic recession, and the pace of hiring is healthy, which is why the Fed's policymakers will likely move closer toward acting soon. In particular, the officials are expected to discuss the timing and mechanics of slowing their $120 billion-a-month in bond purchases — a pandemic-era policy that is intended to keep long-term loan rates low to spur borrowing and spending.

This week's meeting occurs against the backdrop of a risky policy bet by Fed Chair Jerome Powell. Powell is gambling that the central bank can engineer an exceedingly delicate task: To keep the Fed's short-term benchmark rate pegged near zero, where it has been since March 2020, until the job market has fully healed, without fueling a sustained bout of high inflation.

Yet the stakes around that bet are rising, with consumer prices having jumped 5.4% in June from a year ago, the biggest increase in 13 years. Last month's surge marked a fourth straight month of unexpectedly large price increases, heightening fears that persistently higher inflation will erode the value of recent pay raises and undermine the economic recovery.

The main concern is that the Fed will end up responding too late and too aggressively to high inflation by quickly jacking up interest rates and perhaps causing another recession. Last week, Republicans in Congress peppered Powell with questions about inflation, for which they largely blamed President Joe Biden's $1.9 trillion stimulus package, which was enacted in March.

In his testimony, Powell largely stood by his view that higher inflation will prove temporary. His reasoning is that recent high price increases — for things like used and new cars, hotel rooms and airline tickets — have been driven mainly by supply shortages related to the swift reopening of the economy. But he also stated more explicitly than before that the Fed won't hesitate to raise rates should it decide that inflation is getting out of control.

After a period of broad agreement during the pandemic crisis, the Fed's policymakers appear divided over how soon to start reducing — or “tapering,” in Fed parlance — its monthly bond purchases. Several regional Fed bank presidents support tapering soon, including James Bullard of the St. Louis Fed, Patrick Harker of the Philadelphia Fed and Robert Kaplan of the Dallas Fed.

Powell has said that the central bank wants to see “substantial further progress” toward its goals of maximum employment and price stability before it would consider reducing the bond purchases. To make up for years of inflation remaining below 2%, Powell said, the Fed wants inflation to moderately exceed its 2% average inflation target and to show signs of remaining above it for an unspecified time. In recent months, as consumer demand has exceeded the supply of goods and services in some industries, inflation has topped 2%.

Powell suggested during his congressional testimony last week that the economy was “still a ways off” from achieving that progress. On Wednesday, when the Fed issues a policy statement and Powell holds a news conference, any signal that such progress is near could mean that the Fed is getting closer to reducing its bond purchases.

Nathan Sheets, chief economist at PGIM Fixed Income and a former director of international finance at the Fed, said the divide on the Fed reflects two sharply different ways of viewing the economy. Those officials who support an earlier taper are likely focused on current levels of high inflation and the fact that the economy has nearly returned to its pre-pandemic size.

Hiring is robust and is being held back mostly by a shortage of workers, rather than a lack of demand for them, Sheets said. Under this view, the Fed can't do much about labor supply.

“The economy is, bottom line, much better than it was a year ago,” Sheets said. “It is getting harder and harder for the Fed to explain why it needs to keep buying $120 billion of assets a month.”

Yet Powell and the rest of the Fed's leadership — notably Richard Clarida, vice chair of the Fed's board, and John Williams, president of the Federal Reserve Bank of New York — will likely stick to a go-slow approach toward withdrawing economic support, Sheets said.

It's not yet clear how the highly contagious and fast-spreading delta variant of the coronavirus might affect the U.S. or global economies, Sheets said, or how the job market will fare in coming months. Hiring could accelerate in September as schools reopen, more parents are able to take jobs and expanded unemployment aid programs expire.

“There is no reason whatsoever for us to be in a hurry here,” Sheets said, summarizing the leadership's likely view. The bond market is signaling much less concern about future inflation, with the yield on the 10-year Treasury note having fallen by nearly a half-percentage point since the spring, to about 1.28%.

This also gives the Fed more time to consider its options, Sheets said.

Powell has said the Fed will communicate its intention to taper “well in advance” of doing so.

David Mericle, an economist at Goldman Sachs, said that based on historical practice, that would mean that the central bank will likely signal its intentions about two meetings before announcing a move. Accordingly, Mericle predicts that the Fed will provide its first clear hint about tapering at its September meeting, followed by another signal in November before announcing the actual taper in December.