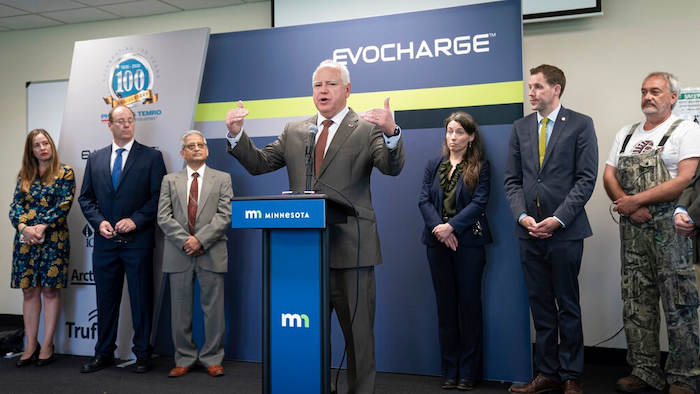 Minnesota Gov. Tim Walz speaks during a news conference after touring Phillips & Temro in Eden Prairie, Minn. Monday, July 26, 2021. Minnesota became the first Midwestern state to adopt a plan for encouraging the switchover to electric vehicles, as Gov. Walz predicted that someday people will wonder why there was such as fuss.
Glen Stubbe/Star Tribune via AP

EDEN PRAIRIE, Minn. (AP) — Minnesota on Monday became the first Midwestern state to adopt a plan for encouraging the switchover to electric vehicles as Gov. Tim Walz predicted that someday people will wonder why there was such a fuss.

The Democratic governor visited Phillips and Temro Industries, which manufactures electric vehicle chargers, to highlight the state's “clean car” rules, which take effect in 2024 for the 2025 model year. He said the rules will mean more choices for consumers shopping for electric cars, cleaner air at a time of growing concern about climate change, and more jobs.

Fourteen other states already have adopted similar standards, which require manufacturers and dealers to supply more electric vehicles. The states' rules are all based on California's tough standards, and that's been a major sore point for Minnesota auto dealers and other critics.

“In the 14 other states, the sky did not fall,” Walz told reporters after his tour. “The car industry did not collapse. Jobs were not lost. In fact, just the opposite happened in all 14 other states.”

The Minnesota Pollution Control Agency made the standards official by publishing them in the State Register on Monday following a contentious process. The Walz administration angered Republican lawmakers by bypassing the Legislature's input and imposing them with its executive authority. Republicans held up an environmental projects bill for over a year and threatened to shut down state parks in an unsuccessful effort to force the governor to back down.

And Walz paid a heavy political price for defying them. Laura Bishop resigned as commissioner of the Minnesota Pollution Control Agency earlier this month when it became apparent that the GOP-controlled state Senate was about to vote to reject her confirmation over her agency's leading role in the process.

“It puts California bureaucrats in charge of our industry here in Minnesota,” Scott Lambert, president of the Minnesota Automobile Dealers Association, said in an interview. “The state has no ability to modify or amend these rules.”

Lambert added that the changes will swamp Minnesota dealers with more electric vehicles than customers want to buy, and force up car prices for everyone.

Republican Senate Majority Leader Paul Gazelka, of East Gull Lake, who has said he expects the rules to be a campaign issue in 2022. called them another example of Walz one-man rule, in line with his reliance on emergency powers to manage the pandemic.

“I’m not surprised Governor Walz continues to issue mandates after the last 18 months," Gazelka said in a statement. “His emergency powers may be over but his ego trip is not, and it looks like ‘One Minnesota’ is just ‘Walz’s Minnesota,’” he added, echoing the governor's 2018 campaign theme.

Walz said fears haven't come true in the states that have already adopted the rules, and that he thinks it's just a matter of time before the rest of the country catches up. And he predicted that electric vehicle buyers will flock to Minnesota because the state will offer more models than other states.

“I think that this will be the national standard before long,” the governor said.

Democratic Rep. Rick Hansen, of South St. Paul, who chairs a key environment committee, said proponents had overcome “unprecedented opposition” since Walz proposed the change in 2019. He gave a shout-out to Bishop for making it happen before she lost her job over it.

“At the end of the day, this is going to benefit everybody,” Hansen said. “And whether we have some scars from this, whether it was difficult, whether it was challenging, it is worth it.”