Family Behind OxyContin Attests to Role in Opioid Crisis

But they stopped short of apologizing or admitting wrongdoing in testimony before Congress. 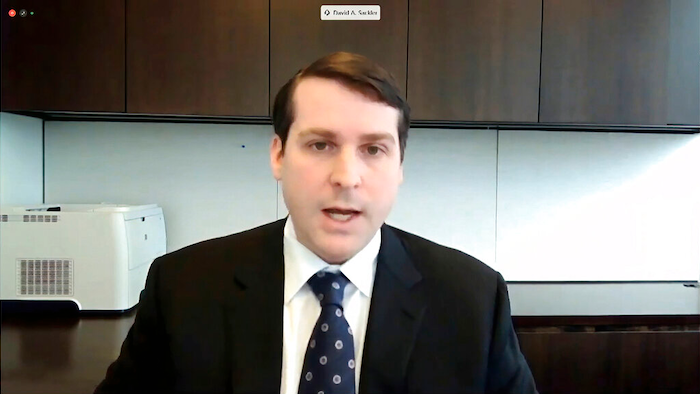 Two owners of the company that makes OxyContin acknowledged to Congress on Thursday that the powerful prescription painkiller played a role in the opioid epidemic but they stopped short of apologizing or admitting wrongdoing.

“I want to express my family’s deep sadness about the opioid crisis,” David Sackler, whose family owns Purdue Pharma, said at a rare appearance in a public forum. “OxyContin is a medicine that Purdue intended to help people, and it has helped, and continues to help, millions of Americans.”

The company’s marketing efforts have been blamed for contributing to an addiction and overdose crisis that has been linked to 470,000 deaths in the United States over the past two decades.

Kathe Sackler, David Sackler’s cousin, told the House Oversight and Reform Committee that she knows “the loss of any family member or loved one is terribly painful and nothing is more tragic than the loss of a child.”

“As a mother,” she said, “my heart breaks for the parents who have lost their children. I am so terribly sorry for your pain.”

Rep. Kelly Armstrong, R-N.D., noted that OxyContin sales revenue increased even after the company pleaded guilty to crimes for improper marketing of the drug. “You want to ask what you could have done differently?” he asked. “Look at your own damn balance sheet.”

The two Sacklers, descendants of two of the three brothers who bought Purdue nearly 70 years ago, appeared before the committee in a video hearing held amid coronavirus restrictions.

They took the step after the committee’s chairwoman, Democratic Rep. Carolyn Maloney of New York, threatened to issue subpoenas. In contrast to the family members, Purdue CEO Craig Landau testified that the company accepts “full responsibility."

The Sacklers agreed to provide information about “shell companies" that hold family money and to make public documents.

Even before any of the witnesses testified, committee members from both political parties blasted them. Maloney said: “Most despicably, Purdue and the Sacklers worked to deflect the blame for all that suffering away from themselves, and onto the very people struggling with the OxyContin addiction.”

GOP Rep. James Comer of Kentucky, a hard-hit state, said, “The Sackler family profited immensely from the deaths of millions of Americans.” But Comer worried that holding the hearing now could delay justice for the people harmed by the drug as litigation swirls.

Parents of people who died from using the drug also appeared via video to tell about their children.

The hearing came three weeks after Purdue pleaded guilty to three criminal charges as part of a settlement with the Department of Justice.

The company agreed to pay more than $8 billion in forfeitures and penalties, while members of the Sackler family would have to pay $225 million to the government. The deal leaves open the possibility that family members could be criminally prosecuted.

Under questioning, David Sackler said family members and others on Purdue’s board of directors were “completely unaware” of criminal conduct at the company, and that some of that behavior was contrary to the board’s directions.

The settlement requires the company to hand over just $225 million of the $8 billion total to the government as long as Purdue makes good on plans to settle thousands of lawsuits filed by state and local governments, a matter now in bankruptcy court.

The Stamford, Connecticut-based company and the Sacklers have proposed resolving the suits by transforming Purdue into a public benefit corporation, with its profits used to combat the opioid epidemic.

Some members of Congress and attorneys general for about half the states oppose that idea, which includes a requirement for Sackler family members to pay at least $3 billion in addition to giving up control of the company. Court documents show the Sacklers have received more than $12 billion from Purdue since OxyContin was released. A third branch of the family sold its stake in the company before the blockbuster painkiller was developed in the 1990s.

David Sackler told the committee that the value of the company plus the $3 billion the family would contribute add up to more than the family received from OxyContin. He also noted that about half of what family members took out of the company was paid in taxes. Armstrong sarcastically thanked him for that.

Both Sacklers said that they and others in their family regard addiction as a disease — something that was not always the case, according to emails that have been surfaced in investigations over the years.

Rep. Raja Krishnamoorthi, D-Ill., chastised Landau for seeking a $3 million bonus. Krishnamoorthi said that money should go to people who were hurt by OxyContin instead. “Shame on you, Dr. Landau,” he said.

Krishnamoorthi also showed images of luxury homes David Sackler had owned in Manhattan and the Bel Air neighborhood of Los Angeles. “I would submit that you and your family are addicted to money,” he told Sackler.

Rep. Carol Miller, a Republican whose West Virginia district has been devastated by addictions and overdoses implored David Sackler, who said he had vacationed in Appalachia, to visit communities the drugs have harmed.

Rep. Peter Welch, D-Vt., compared the Sacklers to drug lord Joaquin “El Chapo” Guzman, and asked Kathe Sackler why the Sacklers should not be made to repay all the money they made from OxyContin. She said that would be up to a legal proceeding.

Committee members were unmoved by the Sacklers' explainations.

“Watching you testify makes my blood boil,” said Rep. Jim Cooper, D-Tenn. “I’m not sure that I’m aware of any family in America that’s more evil than yours.”