Peter Madsen was convicted of torturing and murdering a journalist on his homemade submarine. 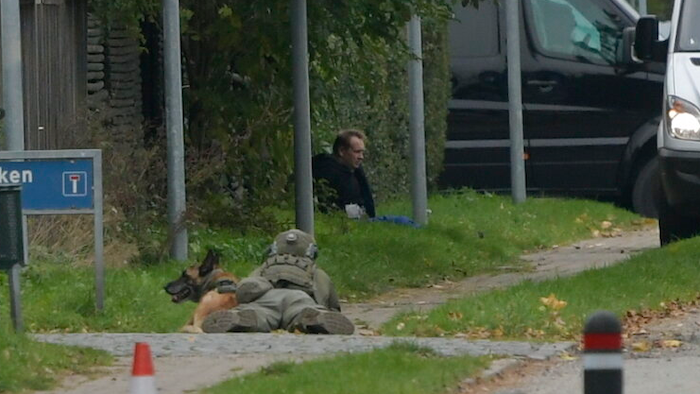 A police office watches Peter Madsen as he sits on the side of a road after being apprehended following a failed escape attempt.
Associated Press

COPENHAGEN, Denmark (AP) — A Danish man convicted of torturing and murdering a Swedish journalist on his homemade submarine made a dramatic but brief escape from a suburban Copenhagen prison Tuesday, reportedly taking a hostage to break out before police recaptured him.

Peter Madsen was quickly apprehended near the Herstedvester prison where he is serving a life sentence for the killing of Kim Wall.

“It goes without saying that convicted prisoners who have committed the worst possible crimes should not be able to escape from the custody of the authorities,” Haekkerup tweeted.

“When we came, he threw away something that looked like a firearm,” said Mogens Lauridsen, operations chief of the suburban Copenhagen police.

Madsen, one of Denmark's most notorious criminals, was captured about five minutes after the escape and around 500 meters (less than a half-mile) from the facility. Prison personnel who followed him saw that he had jumped into a passing white van and informed police.

Lauridsen said that they don't believe Madsen had an accomplice.

Police officers then found on Madsen “what seems to be a belt with explosives,” Lauridsen said. He was handcuffed, officers stepped back and Madsen was left on the side of a road while a bomb squad investigated the belt, Lauridsen said.

“It seems to be a bogus belt,” he said, adding it was unclear whether Madsen had made it or the object which looked like a firearm.

Prison head Hanne Hoegh Rasmussen told a news conference that the escape was being investigated and that she couldn't immediately confirm media reports that Madsen took a female prison psychologist hostage inside the prison.

“No one has been injured physically,” Hoegh Rasmussen said, adding that prison staff were getting psychological support.

The facility has 161 cells and has a wing with inmates who have psychiatric, psychological or sexual behavior problems.

In 2018, Madsen was sentenced in the Copenhagen City Court to life in prison for killing Wall, a 30-year-old reporter from Sweden who he lured aboard his homemade submarine in 2017 with the promise of an interview. He dismembered her body and dumped it at sea.

Madsen lost his appeal, shortly after apologizing to the victim’s family who were present in the appeals court. The sensational case has gripped Scandinavia.

Madsen has denied murdering Wall. He claims she died accidentally inside the submarine, but he has confessed to throwing her body parts into the Baltic Sea.

Life sentences in Denmark usually mean 16 years in prison, but convicts are reassessed to determine whether they would pose a danger to society if released and can be kept longer.

A self-taught engineer, Madsen built rockets in his spare time but never went to college. In 2008, he launched his homemade UC3 Nautilus submarine.

Wall had planned to interview Madsen for a story on a rocket program he founded in 2014, with the goal of building a crowdfunded rocket to launch himself into space. But by the time he finally texted her, his cash flow had dried up and he had canceled the planned test launch.