Under Armour announced it was ending its contract with the university four years into a 15-year, $280 million deal. 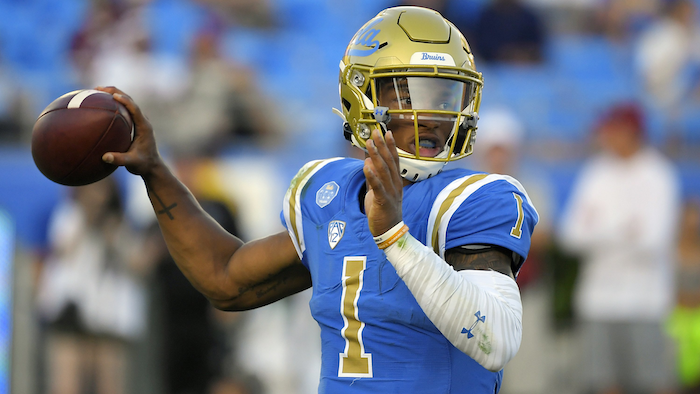 UCLA quarterback Dorian Thompson-Robinson during the first half of a game against Oklahoma, Sept. 14, 2019, in Pasadena, Calif.
AP Photo/Mark J. Terrill

LOS ANGELES (AP) — UCLA filed a lawsuit against Under Armour on Wednesday in U.S. District Court in Los Angeles for breach of contract, seeking damages in excess of $200 million..

Under Armour announced in late June that it was ending its deal with the university. The two sides were four years into a 15-year deal worth $280 million, which remains the highest in college athletics.

Under Armour paid $11 million per year in rights and marketing fees as well as contributing $2 million per year to aid in facility improvements. Under terms of the contract, the company is supposed to supply $6.85 million in athletic apparel, footwear and uniforms.

“It is unfortunate that Under Armour is opportunistically using the global pandemic to try to walk away from a binding agreement it made in 2016 but no longer likes," UCLA vice chancellor of strategic communications Mary Osako said in a statement. "UCLA has met the terms of the agreement, which does not require that games in any sport be played on a particular schedule. We filed this lawsuit in order to support our student-athletes and the broader UCLA community, including the athletic department that has brought 118 national championships to Westwood.”

The company cited Force Majeure due to the coronavirus pandemic as one of the reasons it was terminating the deal. Another was UCLA's struggles in its flagship sports. The football program has had a losing record four straight seasons, including a 7-17 mark in Chip Kelly’s first two seasons, which has led to declining attendance at the Rose Bowl. Men’s basketball struggled the first half of last season but won nine of its last 11 in Mick Cronin’s first season.

Under Armour said in a statement Wednesday that it is confident in their position and that they would defend it.

“We sought and remain open to working out a reasonable and appropriate transition for the university, and most importantly for the student-athletes,” the statement continues. “In fact, at UCLA’s request after the termination of the agreement, Under Armour continued to deliver athletic products for the 2020-2021 school year because we support athletes, even as it remains uncertain when sports will resume.”