And another 3,000 have tested positive. 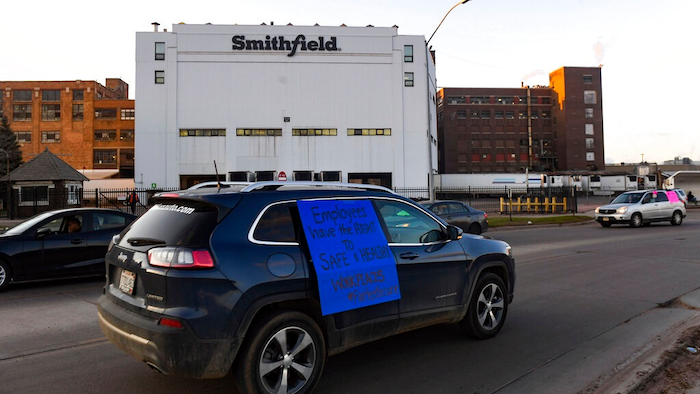 SIOUX FALLS, S.D. (AP) — At least 44 meatpacking workers in the U.S. have died from the new coronavirus and another 3,000 have tested positive, according to an estimate released Thursday by the largest union representing workers.

Meat processing plants have become hot spots for infections in communities across the country, but most have stayed open since President Donald Trump's executive order a month ago declaring them critical infrastructure. The United Food and Commercial Workers union said 30 meatpacking plants have closed at some point since March, resulting in an estimated 40% reduction in pork production and a 25% reduction in beef.

The actual number of employees with the coronavirus is likely higher than the estimate, said Mark Lauritsen, director of the food processing and meatpacking division for the United Food and Commercial Workers International. The union compiled the figures from local union members who either received data from the meatpacking plant or verified infections with employees.

In some places, the number of infections is hard to come by because they are not released by state officials, Lauritsen said. He pointed to Gov. Pete Rickett's decision not to report the number of infected workers at meat processing plants in Nebraska.

As plants reopen and scale up production, many have installed physical barriers between workstations and put up hand-sanitizing stations, following guidelines from the Occupational Safety and Health Administration and the Centers for Disease Control and Prevention. But most of the guidelines meant to keep workers safe are unenforceable.

“You want to save the food supply chain, you have to make those workers safe," Lauritsen said. “Then they’ll do their job.”