Cheaper, better robots will replace human workers in the world's factories at a faster pace over the next decade, pushing labor costs down 16 percent, a report Tuesday said. 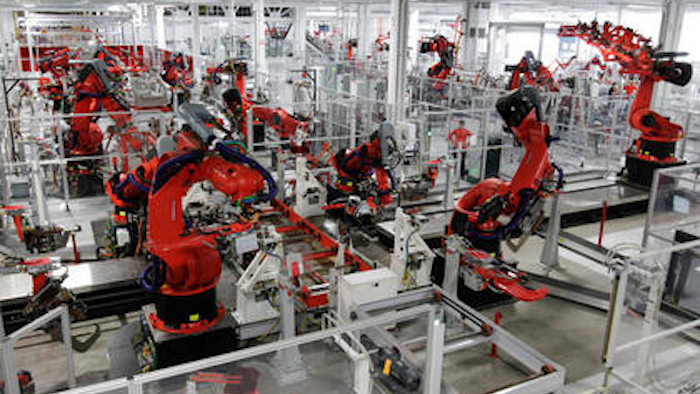 WASHINGTON (AP) — Cheaper, better robots will replace human workers in the world's factories at a faster pace over the next decade, pushing labor costs down 16 percent, a report Tuesday said.
The Boston Consulting Group predicts that investment in industrial robots will grow 10 percent a year in the world's 25-biggest export nations through 2025, up from 2 percent to 3 percent a year now. The investment will pay off in lower costs and increased efficiency.
Robots will cut labor costs by 33 percent in South Korea, 25 percent in Japan, 24 percent in Canada and 22 percent in the United States and Taiwan. Only 10 percent of jobs that can be automated have already been taken by robots. By 2025, the machines will have more than 23 percent, Boston Consulting forecasts.
Robots are getting cheaper. The cost of owning and operating a robotic spot welder, for instance, has tumbled from $182,000 in 2005 to $133,000 last year, and will drop to $103,000 by 2025, Boston Consulting says.
And the new machines can do more things. Old robots could only operate in predictable environments. The newer ones use improved sensors to react to the unexpected.
In a separate report, RBC Global Asset Management notes that robots can be reprogrammed far faster and more efficiently than humans can be retrained when products are updated or replaced — a crucial advantage at a time when smartphones and other products quickly fade into obsolescence.
"As labor costs rise around the world, it is becoming increasingly critical that manufacturers rapidly take steps to improve their output per worker to stay competitive," said Harold Sirkin, a senior partner at Boston Consulting and co-author of the report. "Companies are finding that advances in robotics and other manufacturing technologies offer some of the best opportunities to sharply improve productivity."
Boston Consulting studied 21 industries in 25 countries last year, interviewing experts and clients and consulting government and industry reports.
The rise of robots won't be limited to developed countries with their aging, high-cost workforces. Even low-wage China will use robots to slash labor costs by 18 percent, Boston consulting predicts.
Increasing automation is likely to change the way companies evaluate where to open and expand factories. Boston Consulting expects that manufacturers will "no longer simply chase cheap labor." Factories will employ fewer people, and those that remain are more likely to be highly skilled. That could lure more manufacturers back to the United States from lower-wage emerging market countries.
Latest