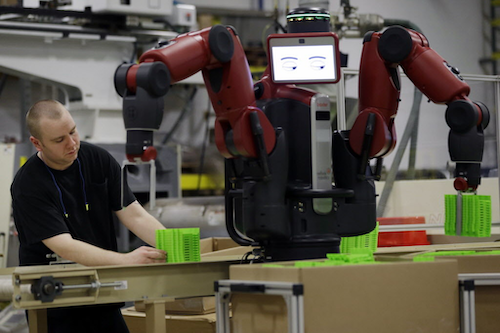 The study by Georgetown University's Center on Education and the Workforce said although the percentage of manufacturing jobs plummeted from 40 percent to 10 percent of all U.S. jobs since the end of World War II, output in those jobs climbed from $100,000 per person to $300,000.

The workers that remained in the manufacturing sector, meanwhile, often needed higher levels of education in order to work with increasingly sophisticated technology. The report said the percentage of manufacturing workers with college educations climbed from 20 percent to more than 50 percent.

As a result, the authors wrote, employers increased factory output without hiring additional workers. The report showed employment in the production of goods remained flat at about 26 million, while service industry positions accounted for all of the 82 million new jobs created between 1967 and 2011.

Contrary to popular perception, however, the report said that the decline in manufacturing jobs as a share of the overall job picture did not give way to low-wage service industry jobs.

"In short, the shift in America’s workforce has not been from factories to fast-food outlets," Anthony Carnevale and Stephen Rose wrote. "Rather, the key growth in U.S. employment has come in offices and non-office settings like hospitals and schools that provide higher-skill services."

The study said college-educated workers now account for more than half of the nation's economic output despite comprising less than one-third of the workforce.

The authors also cautioned that although the economic shift in recent decades benefited those with college educations, "the divide between college haves and have-nots has become a significant structural cause of growing earnings inequality."